Prince Prigio From "His Own Fairy Book" 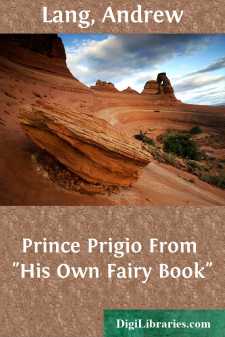 The Author of this book is also the Editor of the Blue, Red, Greenland Yellow Fairy Books. He has always felt rather an impostor, because so many children seem to think that he made up these books out of his own head. Now he only picked up a great many old fairy tales, told in French, German, Greek, Chinese, Red Indian, Russian, and other languages, and had them translated and printed, with pictures. He is glad that children like them, but he must confess that they should be grateful to old forgotten people, long ago, who first invented these tales, and who knew more about fairies than we can hope to do.

My Own Fairy Book, which you now have in your hands, was made up altogether out of his own head by the Author, of course with the help of the Historical Papers in the kingdom of Pantouflia. About that ancient kingdom very little is known. The natives speak German; but the Royal Family, as usual, was of foreign origin. Just as England has had Norman, Scottish, and, at present, a line of German monarchs, so the kings of Pantouflia are descended from an old Greek family, the Hypnotidæ, who came to Pantouflia during the Crusades. They wanted, they explained, not to be troubled with the Crusades, which they thought very injudicious and tiresome. The Crest of the regal house is a Dormouse, dormant, proper, on a field vert, and the Motto, when translated out of the original Greek, means, Anything for a Quiet Life.

It may surprise the young reader that princes like Prigio and Ricardo, whose feet were ever in the stirrup, and whose lances were always in rest, should have descended from the family of the Hypnotidæ, who were remarkably lazy and peaceful. But these heroes doubtless inherited the spirit of their great ancestress, whose story is necessary to be known. On leaving his native realm during the Crusades, in search of some secure asylum, the founder of the Pantouflian monarchy landed in the island of Cyprus, where, during the noon-tide heat, he lay down to sleep in a cave. Now in this cave dwelt a dragon of enormous size and unamiable character. What was the horror of the exiled prince when he was aroused from slumber by the fiery breath of the dragon, and felt its scaly coils about him!

"Oh, hang your practical jokes!" exclaimed the prince, imagining that some of his courtiers were playing a prank on him.

"Do you call this a joke?" asked the dragon, twisting its forked tail into a line with his royal highness's eye.

"Do take that thing away," said the prince, "and let a man have his nap peacefully.''

"Kiss me!" cried the dragon, which had already devoured many gallant knights for declining to kiss it.

"Give you a kiss," murmured the prince; "oh, certainly, if that's all! Anything for a quiet life."

So saying, he kissed the dragon, which instantly became a most beautiful princess; for she had lain enchanted as a dragon, by a wicked magician, till somebody should be bold enough to kiss her.

"My love! my hero! my lord! how long I have waited for thee; and now I am eternally thine own!"

So murmured, in the most affectionate accents, the Lady Dragonissa, as she was now called....