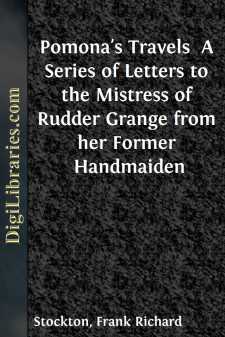 This series of letters, written by Pomona of "Rudder Grange" to her former mistress, Euphemia, may require a few words of introduction. Those who have not read the adventures and experiences of Pomona in "Rudder Grange" should be told that she first appeared in that story as a very young and illiterate girl, fond of sensational romances, and with some out-of-the-way ideas in regard to domestic economy and the conventions of society. This romantic orphan took service in the "Rudder Grange" family, and as the story progressed she grew up into a very estimable young woman, and finally married Jonas, the son of a well-to-do farmer. Even after she came into possession of a husband and a daughter Pomona did not lose her affection for her former employers.

About a year before the beginning of the travels described in these letters Jonas's father died and left a comfortable little property, which placed Pomona and her husband in independent circumstances. The ideas and ambitions of this eccentric but sensible young woman enlarged with her fortune. As her daughter was now going to school, Pomona was seized with the spirit of emulation, and determined as far as was possible to make the child's education an advantage to herself. Some of the books used by the little girl at school were carefully and earnestly studied by her mother, and as Jonas joined with hearty good-will in the labors and pleasures of this system of domestic study, the family standard of education was considerably raised. In the quick-witted and observant Pomona the improvement showed itself principally in her methods of expression, and although she could not be called at the time of these travels an educated woman, she was by no means an ignorant one.

When the daughter was old enough she was allowed to accept an invitation from her grandmother to spend the summer in the country, and Pomona determined that it was the duty of herself and husband to avail themselves of this opportunity for foreign travel.

Accordingly, one fine spring morning, Pomona, still a young woman, and Jonas, not many years older, but imbued with a semi-pathetic complaisance beyond his years, embarked for England and Scotland, to which countries it was determined to limit their travels. The letters which follow were written in consequence of the earnest desire of Euphemia to have a full account of the travels and foreign impressions of her former handmaiden. Pruned of dates, addresses, signatures, and of many personal and friendly allusions, these letters are here presented as Pomona wrote them to Euphemia.

he first thing Jone said to me when I told him I was going to write about what I saw and heard was that I must be careful of two things. In the first place, I must not write a lot of stuff that everybody ought to be expected to know, especially people who have travelled themselves; and in the second place, I must not send you my green opinions, but must wait until they were seasoned, so that I can see what they are good for before I send them....