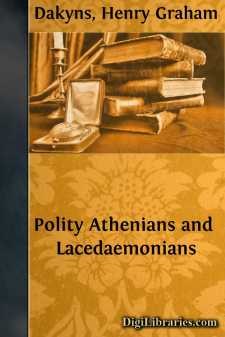 THE POLITY OF THE ATHENIANS I

Now, as concerning the Polity of the Athenians, (1) and the type or manner of constitution which they have chosen, (2) I praise it not, in so far as the very choice involves the welfare of the baser folk as opposed to that of the better class. I repeat, I withhold my praise so far; but, given the fact that this is the type agreed upon, I propose to show that they set about its preservation in the right way; and that those other transactions in connection with it, which are looked upon as blunders by the rest of the Hellenic world, are the reverse.

In the first place, I maintain, it is only just that the poorer classes (3) and the People of Athens should be better off than the men of birth and wealth, seeing that it is the people who man the fleet, (4) and put round the city her girdle of power. The steersman, (5) the boatswain, the lieutenant, (6) the look-out-man at the prow, the shipright—these are the people who engird the city with power far rather than her heavy infantry (7) and men of birth of quality. This being the case, it seems only just that offices of state should be thrown open to every one both in the ballot (8) and the show of hands, and that the right of speech should belong to any one who likes, without restriction. For, observe, (9) there are many of these offices which, according as they are in good or in bad hands, are a source of safety or of danger to the People, and in these the People prudently abstains from sharing; as, for instance, it does not think it incumbent on itself to share in the functions of the general or of the commander of cavalry. (10) The sovereign People recognises the fact that in forgoing the personal exercise of these offices, and leaving them to the control of the more powerful (11) citizens, it secures the balance of advantage to itself. It is only those departments of government which bring emolument (12) and assist the private estate that the People cares to keep in its own hands.

In the next place, in regard to what some people are puzzled to explain—the fact that everywhere greater consideration is shown to the base, to poor people and to common folk, than to persons of good quality—so far from being a matter of surprise, this, as can be shown, is the keystone of the preservation of the democracy....