Politics: A Treatise on Government 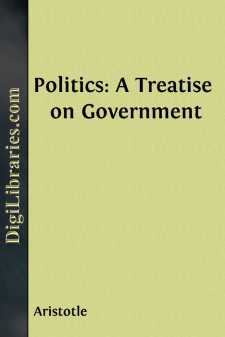 The Politics of Aristotle is the second part of a treatise of which the Ethics is the first part. It looks back to the Ethics as the Ethics looks forward to the Politics. For Aristotle did not separate, as we are inclined to do, the spheres of the statesman and the moralist. In the Ethics he has described the character necessary for the good life, but that life is for him essentially to be lived in society, and when in the last chapters of the Ethics he comes to the practical application of his inquiries, that finds expression not in moral exhortations addressed to the individual but in a description of the legislative opportunities of the statesman. It is the legislator's task to frame a society which shall make the good life possible. Politics for Aristotle is not a struggle between individuals or classes for power, nor a device for getting done such elementary tasks as the maintenance of order and security without too great encroachments on individual liberty. The state is "a community of well-being in families and aggregations of families for the sake of a perfect and self-sufficing life." The legislator is a craftsman whose material is society and whose aim is the good life.

In an early dialogue of Plato's, the Protagoras, Socrates asks Protagoras why it is not as easy to find teachers of virtue as it is to find teachers of swordsmanship, riding, or any other art. Protagoras' answer is that there are no special teachers of virtue, because virtue is taught by the whole community. Plato and Aristotle both accept the view of moral education implied in this answer. In a passage of the Republic (492 b) Plato repudiates the notion that the sophists have a corrupting moral influence upon young men. The public themselves, he says, are the real sophists and the most complete and thorough educators. No private education can hold out against the irresistible force of public opinion and the ordinary moral standards of society. But that makes it all the more essential that public opinion and social environment should not be left to grow up at haphazard as they ordinarily do, but should be made by the wise legislator the expression of the good and be informed in all their details by his knowledge. The legislator is the only possible teacher of virtue.

Such a programme for a treatise on government might lead us to expect in the Politics mainly a description of a Utopia or ideal state which might inspire poets or philosophers but have little direct effect upon political institutions. Plato's Republic is obviously impracticable, for its author had turned away in despair from existing politics. He has no proposals, in that dialogue at least, for making the best of things as they are. The first lesson his philosopher has to learn is to turn away from this world of becoming and decay, and to look upon the unchanging eternal world of ideas. Thus his ideal city is, as he says, a pattern laid up in heaven by which the just man may rule his life, a pattern therefore in the meantime for the individual and not for the statesman. It is a city, he admits in the Laws, for gods or the children of gods, not for men as they are.

Aristotle has none of the high enthusiasm or poetic imagination of Plato. He is even unduly impatient of Plato's idealism, as is shown by the criticisms in the second book. But he has a power to see the possibilities of good in things that are imperfect, and the patience of the true politician who has learned that if he would make men what they ought to be, he must take them as he finds them. His ideal is constructed not of pure reason or poetry, but from careful and sympathetic study of a wide range of facts. His criticism of Plato in the light of history, in Book II. chap, v., though as a criticism it is curiously inept, reveals his own attitude admirably: "Let us remember that we should not disregard the experience of ages; in the multitude of years, these things, if they were good, would certainly not have been unknown; for almost everything has been found out, although sometimes they are not put together; in other cases men do not use the knowledge which they have." Aristotle in his Constitutions had made a study of one hundred and fifty-eight constitutions of the states of his day, and the fruits of that study are seen in the continual reference to concrete political experience, which makes the Politics in some respects a critical history of the workings of the institutions of the Greek city state....