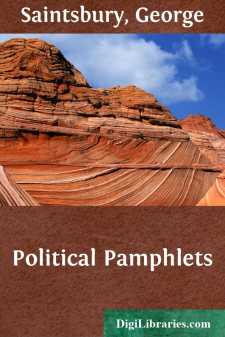 It is sometimes thought, and very often said, that political writing, after its special day is done, becomes more dead than any other kind of literature, or even journalism. I do not know whether my own judgment is perverted by the fact of a special devotion to the business, but it certainly seems to me that both the thought and the saying are mistakes. Indeed, a rough-and-ready refutation of them is supplied by the fact that, in no few cases, political pieces have entered into the generally admitted stock of the best literary things. If they are little read, can we honestly say that other things in the same rank are read much more? And is there not the further plea, by no means contradictory, nor even merely alternative, that the best examples of them are, as a rule, merged in huge collected 'Works,' or, in the case of authors who have not attained to that dignity, simply inaccessible to the general? At any rate my publishers have consented to let me try the experiment of gathering certain famous things of the sort in this volume, and the public must decide.

I do not begin very early, partly because examples of the Elizabethan political pamphlet, or what supplied its place, will be given in another volume of the series exclusively devoted to the pamphlet literature of the reigns of Eliza and our James, partly for a still better reason presently to be explained. On the other hand, though another special volume is devoted to Defoe, the immortal Shortest Way with the Dissenters is separated from the rest of his work, and given here. Most of the contents, however, represent authors not otherwise represented in the series, and though very well known indeed by name, less read than quoted. The suitableness of the political pamphlet, both by size and self-containedness, for such a volume as this, needs no justification except that which it, like everything else, must receive, by being put to the proof of reading.

There is no difficulty in showing, with at least sufficient critical exactness, why it is not possible or not desirable to select examples from very early periods even of strictly modern history. The causes are in part the same as those which delayed the production of really capital political verse (which has been treated in another volume), but they are not wholly the same. The Martin Marprelate pamphlets are strictly political; so are many things earlier, later, and contemporary with them, by hands known and unknown, great and small, skilled and unskilled; so are some even in the work of so great a man as Bacon. But very many things were wanting to secure the conditions necessary to the perfect pamphlet. There was not the political freedom; there was not the public; there was not the immediate object; there was not, last and most of all, the style. Political utterances under a more or less despotic, or, as the modern euphemism goes, 'personal' government, were almost necessarily those of a retained advocate, who expected his immediate reward, on the one hand; or of a rebel, who stood to make his account with office if he succeeded, or with savage punishment if he failed, on the other....