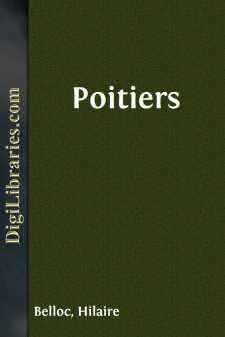 The Battle of Poitiers was fought ten years and four weeks after that of Crécy.

The singular similarity between the two actions will be pointed out upon a later page. For the moment it must suffice to point out that Poitiers and Crécy form unique historical parallels, distinguishing like double summits the English successes of Edward III.’s army upon the Continent and of the first part of the Hundred Years’ War.

For the political situation which had produced that conflict, and for the objects which Edward III. had in provoking it, I must refer my reader to the first section of my little book upon Crécy in this series; as also for the armament and organisation of the forces that served the English crown. There remain to be added, however, for the understanding of Poitiers and its campaign, two features which differentiate the fighting of 1356 from that of ten years before. These two features are: first, the character of the commander; and secondly, the nature of the regions from which he started and through which he proceeded, coupled with the political character of the English rule in the South of France. I will take these points in inverse order.

When Calais had fallen and had become an English possession in the summer of 1347 no peace followed. A truce was patched up for some months, followed by further truces. Through the mediation of the Pope a final and definite treaty was sketched, which should terminate the war upon the cession of Aquitaine to Edward III. in full sovereignty. The French Valois king would perhaps have agreed to a settlement which would have preserved his feudal headship, though it would have put the Plantagenets in virtual possession of half France (as France was then defined). But Edward III. would not accept the terms. He had claimed the crown of France. He had won his great victory at Crécy still claiming that crown. He would not be content with adding to his feudal tenures under the French crown. He would add to his sovereignty at least, to his absolute sovereignty, or continue the war. In 1354 (the Black Death intervening) the war was renewed. Edward would have been content, not with the whole of Aquitaine, but with complete sovereignty over the triangle between the Garonne and the Pyrenees in the south, coupled with complete sovereignty over the north-eastern seaboard of France from the Somme to Calais, and inland as far as Arras, and its territory, the Artois. But the French monarchy, though ready to admit feudal encroachments, would not dismember the nominal unity of the kingdom: just as a stickler in our north will grant a 999-year lease, but will not sell.

The result of this breach in the negotiations was that Edward, and his son the Black Prince, entered upon the renewal of the war with a vague claim to Aquitaine as a whole, with an active claim upon Guienne—that is, the territory just north of the Garonne—and a real hold upon Gascony; and still preserving at the back of the whole scheme of operations that half-earnest, half-theatrical plan for an Anglo-French monarchy under the house of Plantagenet which had been formulated twenty-five years before....