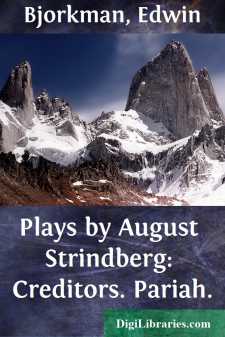 This is one of the three plays which Strindberg placed at the head of his dramatic production during the middle ultra-naturalistic period, the other two being "The Father" and "Miss Julia." It is, in many ways, one of the strongest he ever produced. Its rarely excelled unity of construction, its tremendous dramatic tension, and its wonderful psychological analysis combine to make it a masterpiece.

In Swedish its name is "Fordringsagare." This indefinite form may be either singular or plural, but it is rarely used except as a plural. And the play itself makes it perfectly clear that the proper translation of its title is "Creditors," for under this aspect appear both the former and the present husband of Tekla. One of the main objects of the play is to reveal her indebtedness first to one and then to the other of these men, while all the time she is posing as a person of original gifts.

I have little doubt that Strindberg, at the time he wrote this play—and bear in mind that this happened only a year before he finally decided to free himself from an impossible marriage by an appeal to the law—believed Tekla to be fairly representative of womanhood in general. The utter unreasonableness of such a view need hardly be pointed out, and I shall waste no time on it. A question more worthy of discussion is whether the figure of Tekla be true to life merely as the picture of a personality—as one out of numerous imaginable variations on a type decided not by sex but by faculties and qualities. And the same question may well be raised in regard to the two men, both of whom are evidently intended to win our sympathy: one as the victim of a fate stronger than himself, and the other as the conqueror of adverse and humiliating circumstances.

Personally, I am inclined to doubt whether a Tekla can be found in the flesh—and even if found, she might seem too exceptional to gain acceptance as a real individuality. It must be remembered, however, that, in spite of his avowed realism, Strindberg did not draw his men and women in the spirit generally designated as impressionistic; that is, with the idea that they might step straight from his pages into life and there win recognition as human beings of familiar aspect. His realism is always mixed with idealism; his figures are always "doctored," so to speak. And they have been thus treated in order to enable their creator to drive home the particular truth he is just then concerned with.

Consciously or unconsciously he sought to produce what may be designated as "pure cultures" of certain human qualities. But these he took great pains to arrange in their proper psychological settings, for mental and moral qualities, like everything else, run in groups that are more or less harmonious, if not exactly homogeneous. The man with a single quality, like Moliere's Harpagon, was much too primitive and crude for Strindberg's art, as he himself rightly asserted in his preface to "Miss Julia." When he wanted to draw the genius of greed, so to speak, he did it by setting it in the midst of related qualities of a kind most likely to be attracted by it.

Tekla is such a "pure culture" of a group of naturally correlated mental and moral qualities and functions and tendencies—of a personality built up logically around a dominant central note. There are within all of us many personalities, some of which remain for ever potentialities....