Pioneers and Founders or, Recent Workers in the Mission field 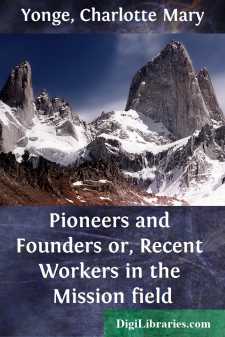 It has been my endeavour in the ensuing narratives to bring together such of the more distinguished Missionaries of the English and American nations as might best illustrate the character and growth of Mission work in the last two centuries.  It is impossible to make it a real history of the Missions of modern times.  If I could, I would have followed in the track of Mr. Maclear’s admirable volume, but the field is too wide, the material at once too numerous and too scattered, and the account of the spread of the Gospel in the distant parts of the earth has yet to be written in volumes far exceeding the bulk of those allotted to the “Sunday Library.”

Two large classes of admirable Missions have been purposely avoided,—namely, those of the Jesuits in Japan, China, and North and South America, and those of the Moravians in Greenland, the United States, and Africa.  These are noble works, but they are subjects apart, and our narratives deal with men exclusively of British blood, with the exception of Schwartz, whose toils were so entirely accepted and adopted by the Church of England, that he cannot but be reckoned among her ambassadors.  The object, then, has been to throw together such biographies as are most complete, most illustrative, and have been found most inciting to stir up others—representative lives, as far as possible—from the time when the destitution of the Red Indians first stirred the heart of John Eliot, till the misery of the hunted negro brought Charles Mackenzie to the banks of the fever-haunted Zambesi.

We think it will be found that, so far from being the talking, exaggerating, unpractical men that the critical and popular mind is apt to suppose, these labourers were in general eminently practical and hard-working.  They seem to us to range themselves into three classes: one, stirred up by the sight of the destitution before their eyes, and quietly trying to supply those needs; one, inspired by fervid zeal to devote themselves; and one, selected by others, taking that selection as a call, and toiling as a duty, as they would have toiled at any other duty set before them.  Each and all have their place, and fulfil the work.  The hindrances and drawbacks are generally not in the men themselves, nor in the objects of their labour, but first and foremost in the almost uniform hostility of the colonists around, who are used to consider the dark races as subjects for servitude, and either despise or resent any attempt at raising them in the scale; and next, in the extreme difficulty of obtaining means.  This it is that has more than anything tended to bring Mission work into disrepute.  Many people have no regular system nor principle of giving—the much-needed supplies can only be charmed out of their pockets by sensational accounts, such as the most really hard-working and devoted men cannot prevail on themselves to pour forth; and the work of collection is left to any of the rank and file who have the power of speech, backed by articles where immediate results may be dwelt upon to satisfy those who will not sow in faith and wait patiently.

And the Societies that do their best to regulate and collect the funds raised by those who give, whether on impulse or principle, are necessarily managed by home committees, who ought to unite the qualities of men of business with an intimate knowledge of the needs and governments of numerous young churches, among varied peoples, nations, and languages, each in an entirely abnormal state; and, moreover, to deal with those great men who now and then rise to fulfil great tasks, and cannot be judged by common rules.  Thus it is that home Societies are often to be reckoned among the trials of Missionaries.

But we will not dwell on such shortcomings, and will rather pass on to what we had designed as the purpose of our present introduction; namely, to supplement the information which the biographical form of our work has necessitated us to leave imperfect, respecting the Missions as well as the men.

Of the Red Indians who first stirred the compassion of John Eliot, there is little that is good to tell, or rather there is little good to tell of the White man’s treatment of them.  Self-government by the stronger people always falls hard on the weaker, and Mission after Mission has been extinguished by the enmity of the surrounding Whites and the corruption and decay of the Indians.  A Moravian Mission has been actually persecuted.  Every here and there some good man has arisen and done a good work on those immediately around him, and at the present time there are some Indians living upon the reserves in the western part of the continent, fairly civilized, settled, and Christianized, and only diminishing from that law of their physical nature that forbids them to flourish without a wilderness in which to roam....