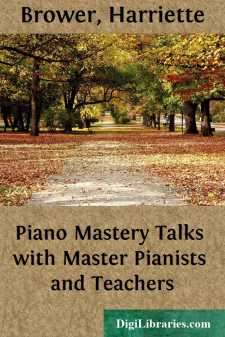 One of the most consummate masters of the piano at the present time is Ignace Jan Paderewski. Those who were privileged to hear him during his first season in this country will never forget the experience. The Polish artist conquered the new world as he had conquered the old; his name became a household word, known from coast to coast; he traveled over our land, a Prince of Tones, everywhere welcomed and honored. Each succeeding visit deepened the admiration in which his wonderful art was held.

The question has often been raised as to the reason of Paderewski's remarkable hold on an audience; wherein lay his power over the musical and unmusical alike. Whenever he played there was always the same intense hush over the listeners, the same absorbed attention, the same spell. The superficial attributed these largely to his appearance and manner; the more thoughtful looked deeper. Here was a player who was a thoroughly trained master in technic and interpretation; one who knew his Bach, Beethoven, Chopin, Schumann and Liszt. These things of themselves would not hold an audience spellbound, for there were other artists equally well equipped. In a final analysis it was doubtless Paderewski's wonderful piano tone, so full of variety and color, so vital with numberless gradations of light and shade, that charmed and enthralled his listeners. It mattered to no one—save the critics—that he frequently repeated the same works. What if we heard the Chromatic Fantaisie a score of times? In his hands It became a veritable Soliloquy on Life and Destiny, which each repetition invested with new meaning and beauty. What player has ever surpassed his poetic conception of Schumann's Papillons, or the Chopin Nocturnes, which he made veritable dream poems of love and ecstasy. What listener has ever forgotten the tremendous power and titanic effect of the Liszt Rhapsodies, especially No. 2? When Paderewski first came to us, in the flush of his young manhood, he taught us what a noble instrument the piano really is in the hands of a consummate master. He showed us that he could make the piano speak with the delicacy and power of a Rubinstein, but with more technical correctness; he proved that he could pierce our very soul with the intensity of his emotion, the poignant, heart-searching quality of his tones, the poetry and beauty of his interpretation.

Paderewski is known as composer and pianist, only rarely does he find time to give instruction on his instrument. Mme. Antoinette Szumowska, the Polish pianist and lecturer was at one time termed his "only pupil." Mr. Sigismond Stojowski, the Polish composer, pianist and teacher has also studied with him. Both can testify as to his value as an instructor.

"Paderewski lays great stress on legato playing, and desires everything to be studied slowly, with deep touch and with full, clear tone. For developing strength he uses an exercise for which the hand is pressed against the keyboard while the wrist remains very low and motionless and each finger presses on a key, bringing, or drawing out as much tone as possible.

"Paderewski advises studying scales and arpeggios with accents, for instance, accenting every third note, thus enabling each finger in turn to make the accent impulse: this will secure evenness of touch. Double passages, such as double thirds and sixths, should be divided and each half practised separately, with legato touch. Octaves should be practised with loose wrists and staccato touch. As a preparatory study practise with thumb alone. The thumb must always be kept curved, with joints well rounded out; it should touch the keys with its tip, so as to keep it on a level with the other fingers. Paderewski is very particular about this point.

"It is difficult to speak of Paderewski's manner of teaching expression, for here the ideas differ with each composer and with every composition....