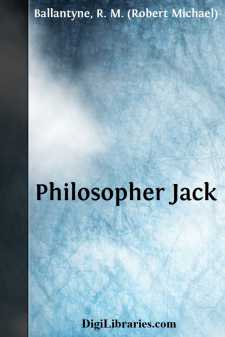 Treats of our Hero and Others.

If the entire circuit of a friend’s conversation were comprised in the words “Don’t” and “Do,”—it might perhaps be taken for granted that his advice was not of much value; nevertheless, it is a fact that Philosopher Jack’s most intimate and valuable—if not valued—friend never said anything to him beyond these two words. Nor did he ever condescend to reason. He listened, however, with unwearied patience to reasoning, but when Jack had finished reasoning and had stated his proposed course of action, he merely said to him, “Don’t,” or “Do.”

“For what end was I created?” said the philosopher, gloomily.

Wise and momentous question when seriously put, but foolish remark, if not worse, when flung out in bitterness of soul!

Jack, whose other name was Edwin, and his age nineteen, was a student. Being of an argumentative turn of mind, his college companions had dubbed him Philosopher. Tall, strong, active, kindly, hilarious, earnest, reckless, and impulsive, he was a strange compound, with a handsome face, a brown fluff on either cheek, and a moustache like a lady’s eyebrow. Moreover, he was a general favourite, yet this favoured youth, sitting at his table in his own room, sternly repeated the question—in varied form and with increased bitterness—“Why was I born at all?”

Deep wrinkles of perplexity sat on his youthful brow. Evidently he could not answer his own question, though in early life his father had carefully taught him the “Shorter Catechism with proofs,” while his good old mother had enforced and exemplified the same. His taciturn friend was equally unable, or unwilling, to give a reply.

After prolonged meditation, Jack relieved his breast of a deep sigh and re-read a letter which lay open on his desk. Having read it a third time with knitted brows, he rose, went to the window, and gazed pathetically on the cat’s parade, as he styled his prospect of slates and chimney cans.

“So,” said he at last, “my dreams are over; prospects gone; hopes collapsed—all vanished like the baseless fabric of a vision.”

He turned from the cat’s parade, on which the shades of evening were descending, to the less romantic contemplation of his empty fire-grate.

“Now,” said he, re-seating himself at his table and stretching his long legs under it, “the question is, What am I to do? shall I kick at fate, throw care, like physic, to the dogs, cut the whole concern, and go to sea?”

“Or,” continued Jack, “shall I meekly bow to circumstances, and struggle with my difficulties as best I may?”

“Do,” replied his friend, whose name, by the way, was Conscience.

For a long time the student sat gazing at the open letter in silence. It was from his father, and ran thus:—

“Dear Teddie,—It’s a long time now that I’ve been thinkin’ to write you, and couldn’t a-bear to give you such a heavy disappointment but can’t putt it off no longer, and, as your mother, poor soul, says, it’s the Lord’s will and can’t be helped—which, of course, it shouldn’t be helped if that’s true—but—well, howsomever, it’s of no use beatin’ about the bush no longer....