Peter and Jane or The Missing Heir 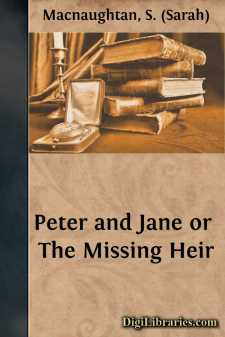 Mrs. Ogilvie, red-haired according to the exact shade then in fashion, and dressed by Paquin, sat in her drawing-room reading the Court Journal. She was a woman who thought on the lines of Aristotle, despised most other women except Charlotte Corday, Judith, Joan of Arc, and a few more, and she dyed her hair and read the Court Journal. People who did not know her sometimes alluded to her as an overdressed woman with a wig. Those who had met her even but once admitted the power of her personality. Perhaps if any one had known her very well he or she would have been bewildered by the many-sided complexities of her character, and would have failed to discover any sort of unity behind its surprising differences. But then, as a matter of fact, no one did know her well.

Those who cared to remember such an old story used to tell how, as a girl of eighteen, she had been deeply in love with a cousin of hers, Greville Monsen by name, and how almost on the eve of her marriage she had thrown him over and had married Colonel Ogilvie the explorer, a man twenty years older than herself, with an enormous fortune, and accounted something of a hero at the time.

Colonel Ogilvie married late in life, and his brother's wife had long ago decided that it would be better if he should never marry at all. Mrs. Lionel Ogilvie was an ambitious woman with a fine family of sons and daughters to whom Colonel Ogilvie's large estates and immense fortune would have been wholly appropriate. She had always been civil to her brother-in-law, although the estates and the money were entailed upon his brother, and she weighed in the balance the disinterested affection which she showed him against her feeling of satisfaction in the fact that he was a daring and indefatigable traveller; one, moreover, who was seldom quite happy unless he was in danger, and who never thoroughly enjoyed a journey if any other white man had trodden the ground before he himself visited it.

Mrs. Lionel Ogilvie was indignant at the news of Colonel Ogilvie's marriage. Being a very wise woman she would probably in time have controlled her temper, and by a little judicious management she might have secured a considerable fortune for herself and her children. But, alas! there was a necessity within her of exploding to some one when, as in this instance, her heart was hot and her head not quite cool. And so, with some sense of justice, venting her spleen upon the cause of it, Mrs. Lionel Ogilvie said certain very unwise and unkind things about her brother-in-law's fiancée and her cousin, Greville Monsen. Of course the heated and uncontrolled words of the disappointed woman were repeated, and there was a terrible and stormy interview between the two brothers, who parted that same day and never spoke to each other again.

Mrs. Francis Ogilvie bore the character of being a cold and dispassionate woman. And this was the more remarkable because on the distaff-side she was of Spanish descent, and might reasonably have been supposed to have inherited the instincts of that passionate and hot-tempered nation....