Perley's Reminiscences, v. 1-2 of Sixty Years in the National Metropolis 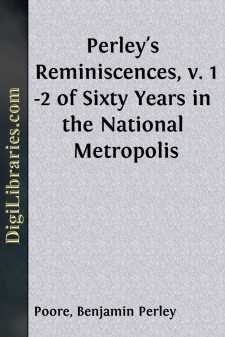 The public favor with which the journalistic writings of the subscriber have been received prompted the publication of these volumes. Their object is to give personal details concerning prominent men and women in social and political life at the National Metropolis since he has known it. He has especially endeavored to portray those who "in Congress assembled" have enacted the laws, and those who have interpreted and enforced the provisions under which the United States has advanced, during the past sixty years, from comparative infancy into the vigor of mature manhood, and has successfully defended its own life against a vigorous attempt at its destruction.

In chronicling what has transpired within his personal recollection at the National Metropolis, he has gathered what "waifs" he has found floating on the sea of chat, in the whirlpools of gossip, or in the quiet havens of conversation. Some of these may be personal —piquantly personal, perhaps—but the mighty public has had an appetite for gossipings about prominent men and measures ever since the time when the old Athenians crowded to hear the plays of Aristophanes.

The subscriber is aware that some who write of prominent persons and political events indulge too much in sycophantic flattery, while others have their brains addled by brooding on some fancied wrong, or their minds have lost their even poise by dwelling on insane reforms or visionary projects. All this may have its use, but the subscriber has preferred to look at things in a more cheerful way, to pluck roses rather than nettles, and neither to throw filth nor to blow trumpets.

While the Republic has preserved with commendable pride the histories of her statesmen and her martial defenders, it is well that the memories of those of the gentler sex, who have from time to time taken prominent part in shaping the destinies of the nation, should also be remembered. This work will give, it is hoped, an idea of stirring events in both political and social life, of the great men and the fascinating women who have figured in Washington during the past six decades. Those who were too well acquainted with these personal details to think of recording them are fast passing away, and some account of them cannot but interest younger generations, while it will not fail to profit the older politicians, publicists, and journalists.

The great difficulty in the compilation of the "Reminiscences" has been the selection from the masses of material accumulated in diaries, autograph letters, and scrap-books containing published literary matter. To have given a connected political and social history of what has transpired at the National Metropolis during the past sixty years would have required a dozen volumes, so the most conspicuous features only have been here and there selected.

Confident of the exact truthfulness of the sketches here given, this work is presented, without apologies, to a generous public as the result of very extensive observation....