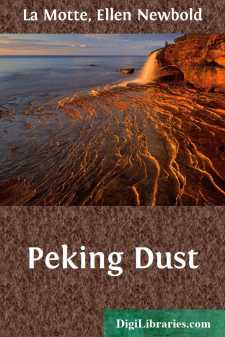 When I came away last August, you said you wanted me to tell you about our travels, particularly about China. Like most Americans, you have a lurking sentimental feeling about China, a latent sympathy and interest based on colossal ignorance. Very well, I will write you as fully as I can. Two months ago my ignorance was fully as overwhelming as yours, but it is being rapidly dispelled. So I'll try to do the same for you, as you said I might. Rash of you, I call it.

I'll take it that you have just about heard that China is on the map, and occupies a big portion of it. You know that she has a ruler of some kind in place of the old empress dowager who died a few years ago. Come to think of it, the ruler is a president, and China is a republic. Vaguely you may remember that she became a republic about five years ago, after a revolution. Also, in the same vague way, you may have heard that the country is old and rich and peaceful, with about four hundred million inhabitants; and beyond that you do not go. Sufficient. I'll go no further, either.

After six weeks in Japan, we set out for Peking, going by way of Korea. On the boat from Kobe to Shimonoseki, passing through the famous Inland Sea of Japan,—which, by the way, reminds one of the eastern shore of Maryland,—we met a young Englishman returning to Shanghai. We three, being the only first-class passengers on the boat, naturally fell into conversation. He said he had been in the East for ten years, engaged in business in Shanghai, so we at once dashed into the subject of Oriental politics. Being quite ignorant of Eastern affairs, but having heard vaguely of certain phases of them, we asked if he could tell us the meaning of "sphere of influence." The Orient seems full of spheres of influence, particularly China.

"How do the European nations acquire these 'spheres of influence' in China?" I asked. "Do they ask the Chinese Government to give them to them?—to set apart certain territory, certain provinces, and give them commercial and trading rights to these areas?"

"Ask the Chinese Government?" repeated the young man, scornfully. "Ask the Chinese? I should say not! The European powers just arrange it among themselves, each decides what provinces it wants, agrees not to trespass upon the spheres of influence of one another, and then they just notify China."

"That's the idea," he returned; "virtually that's all there is to it. Choose what they want and then just notify China."

I'm glad we met that young man. I like things put simply, in words of one syllable, within range of the understanding. Moreover, incredible as it seems, what he told us is true. Oh, of course, as I've found out since, there are treaties and things to be signed after China has been notified....