Passages from the French and Italian Notebooks, Volume 2. 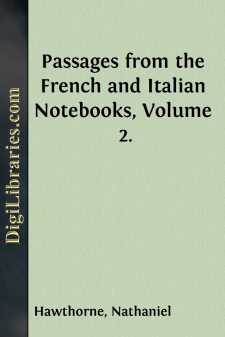 June 8th.—I went this morning to the Uffizi gallery. The entrance is from the great court of the palace, which communicates with Lung' Arno at one end, and with the Grand Ducal Piazza at the other. The gallery is in the upper story of the palace, and in the vestibule are some busts of the princes and cardinals of the Medici family,—none of them beautiful, one or two so ugly as to be ludicrous, especially one who is all but buried in his own wig. I at first travelled slowly through the whole extent of this long, long gallery, which occupies the entire length of the palace on both sides of the court, and is full of sculpture and pictures. The latter, being opposite to the light, are not seen to the best advantage; but it is the most perfect collection, in a chronological series, that I have seen, comprehending specimens of all the masters since painting began to be an art. Here are Giotto, and Cimabue, and Botticelli, and Fra Angelico, and Filippo Lippi, and a hundred others, who have haunted me in churches and galleries ever since I have been in Italy, and who ought to interest me a great deal more than they do. Occasionally to-day I was sensible of a certain degree of emotion in looking at an old picture; as, for example, by a large, dark, ugly picture of Christ hearing the cross and sinking beneath it, when, somehow or other, a sense of his agony, and the fearful wrong that mankind did (and does) its Redeemer, and the scorn of his enemies, and the sorrow of those who loved him, came knocking at any heart and got entrance there. Once more I deem it a pity that Protestantism should have entirely laid aside this mode of appealing to the religious sentiment.

I chiefly paid attention to the sculpture, and was interested in a long series of busts of the emperors and the members of their families, and some of the great men of Rome. There is a bust of Pompey the Great, bearing not the slightest resemblance to that vulgar and unintellectual one in the gallery of the Capitol, altogether a different cast of countenance. I could not judge whether it resembled the face of the statue, having seen the latter so imperfectly in the duskiness of the hall of the Spada Palace. These, I presume, are the busts which Mr. Powers condemns, from internal evidence, as unreliable and conventional. He may be right,—and is far more likely, of course, to be right than I am,—yet there certainly seems to be character in these marble faces, and they differ as much among themselves as the same number of living faces might. The bust of Caracalla, however, which Powers excepted from his censure, certainly does give stronger assurance of its being an individual and faithful portrait than any other in the series. All the busts of Caracalla—of which I have seen many—give the same evidence of their truth; and I should like to know what it was in this abominable emperor that made him insist upon having his actual likeness perpetuated, with all the ugliness of its animal and moral character. I rather respect him for it, and still more the sculptor, whose hand, methinks, must have trembled as he wrought the bust. Generally these wicked old fellows, and their wicked wives and daughters, are not so hideous as we might expect. Messalina, for instance, has small and pretty features, though with rather a sensual development of the lower part of the face. The busts, it seemed to me, are usually superior as works of art to those in the Capitol, and either better preserved or more thoroughly restored. The bust of Nero might almost be called handsome here, though bearing his likeness unmistakably.

I wish some competent person would undertake to analyze and develop his character, and how and by what necessity—with all his elegant tastes, his love of the beautiful, his artist nature—he grew to be such a monster. Nero has never yet had justice done him, nor have any of the wicked emperors; not that I suppose them to have been any less monstrous than history represents them; but there must surely have been something in their position and circumstances to render the terrible moral disease which seized upon them so generally almost inevitable. A wise and profound man, tender and reverent of the human soul, and capable of appreciating it in its height and depth, has a great field here for the exercise of his powers. It has struck me, in reading the history of the Italian republics, that many of the tyrants, who sprung up after the destruction of their liberties, resembled the worst of the Roman emperors. The subject of Nero and his brethren has often perplexed me with vain desires to come at the truth.

There were many beautiful specimens of antique, ideal sculpture all along the gallery,—Apollos, Bacchuses, Venuses, Mercurys, Fauns,—with the general character of all of which I was familiar enough to recognize them at a glance....