Passages from the French and Italian Notebooks, Volume 1. 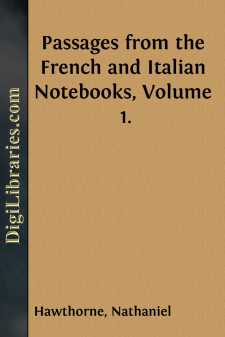 Hotel de Louvre, January 6th, 1858.—On Tuesday morning, our dozen trunks and half-dozen carpet-bags being already packed and labelled, we began to prepare for our journey two or three hours before light. Two cabs were at the door by half past six, and at seven we set out for the London Bridge station, while it was still dark and bitterly cold. There were already many people in the streets, growing more numerous as we drove city-ward; and, in Newgate Street, there was such a number of market-carts, that we almost came to a dead lock with some of them. At the station we found several persons who were apparently going in the same train with us, sitting round the fire of the waiting-room. Since I came to England there has hardly been a morning when I should have less willingly bestirred myself before daylight; so sharp and inclement was the atmosphere. We started at half past eight, having taken through tickets to Paris by way of Folkestone and Boulogne. A foot-warmer (a long, flat tin utensil, full of hot water) was put into the carriage just before we started; but it did not make us more than half comfortable, and the frost soon began to cloud the windows, and shut out the prospect, so that we could only glance at the green fields—immortally green, whatever winter can do against them—and at, here and there, a stream or pool with the ice forming on its borders. It was the first cold weather of a very mild season. The snow began to fall in scattered and almost invisible flakes; and it seemed as if we had stayed our English welcome out, and were to find nothing genial and hospitable there any more.

At Folkestone, we were deposited at a railway station close upon a shingly beach, on which the sea broke in foam, and which J——- reported as strewn with shells and star-fish; behind was the town, with an old church in the midst; and, close, at hand, the pier, where lay the steamer in which we were to embark. But the air was so wintry, that I had no heart to explore the town, or pick up shells with J——- on the beach; so we kept within doors during the two hours of our stay, now and then looking out of the windows at a fishing-boat or two, as they pitched and rolled with an ugly and irregular motion, such as the British Channel generally communicates to the craft that navigate it.

At about one o'clock we went on board, and were soon under steam, at a rate that quickly showed a long line of the white cliffs of Albion behind us. It is a very dusky white, by the by, and the cliffs themselves do not seem, at a distance, to be of imposing height, and have too even an outline to be picturesque.

As we increased our distance from England, the French coast came more and more distinctly in sight, with a low, wavy outline, not very well worth looking at, except because it was the coast of France. Indeed, I looked at it but little; for the wind was bleak and boisterous, and I went down into the cabin, where I found the fire very comfortable, and several people were stretched on sofas in a state of placid wretchedness....