Passages from the English Notebooks, Volume 2. 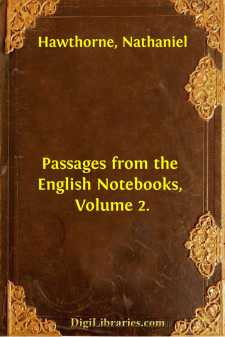 April 4th, 1856.—On Tuesday I went to No. 14 Ludgate Hill, to dine with Bennoch at the Milton Club; a club recently founded for dissenters, nonconformists, and people whose ideas, religious or political, are not precisely in train with the establishment in church and state. I was shown into a large reading-room, well provided with periodicals and newspapers, and found two or three persons there; but Bennoch had not yet arrived. In a few moments, a tall gentleman with white hair came in,—a fine and intelligent-looking man, whom I guessed to be one of those who were to meet me. He walked about, glancing at the periodicals; and soon entered Mr. Tupper, and, without seeing me, exchanged warm greetings with the white-haired gentleman. "I suppose," began Mr. Tupper, "you have come to meet—" Now, conscious that my name was going to be spoken, and not knowing but the excellent Mr. Tupper might say something which he would not, quite like me to overhear, I advanced at once, with outstretched hand, and saluted him. He expressed great joy at the recognition, and immediately introduced me to Mr. Hall.

The dining-room was pretty large and lofty, and there were sixteen guests at table, most of them authors, or people connected with the press; so that the party represented a great deal of the working intellect of London at this present day and moment,—the men whose plays, whose songs, whose articles, are just now in vogue. Mr. Tom Taylor was one of the very few whose writings I had known anything about. He is a tall, slender, dark young man, not English-looking, and wearing colored spectacles, so that I should readily have taken him for an American literary man. I did not have much opportunity of talking with him, nor with anybody else, except Dr. ———, who seemed a shrewd, sensible man, with a certain slight acerbity of thought. Mr. Herbert Ingram, recently elected member of Parliament, was likewise present, and sat on Bennoch's left.

It was a very good dinner, with an abundance of wine, which Bennoch sent round faster than was for the next day's comfort of his guests. It is singular that I should thus far have quite forgotten W——— H————, whose books I know better than those of any other person there. He is a white-headed, stout, firm-looking, and rather wrinkled-faced old gentleman, whose temper, I should imagine, was not the very sweetest in the world. There is all abruptness, a kind of sub-acidity, if not bitterness, in his address; he seemed not to be, in short, so genial as I should have anticipated from his books.

As soon as the cloth was removed, Bennoch, without rising from his chair, made a speech in honor of his eminent and distinguished guest, which illustrious person happened to be sitting in the selfsame chair that I myself occupied. I have no recollection of what he said, nor of what I said in reply, but I remember that both of us were cheered and applauded much more than the occasion deserved. Then followed about fifty other speeches; for every single individual at table was called up (as Tupper said, "toasted and roasted"), and, for my part, I was done entirely brown (to continue T——-'s figure)....