Passages from the English Notebooks, Complete 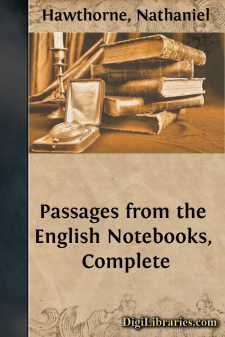 It seems justly due to Mr. Hawthorne that the occasion of any portion of his private journals being brought before the Public should be made known, since they were originally designed for his own reference only.

There had been a constant and an urgent demand for a life or memoir of Mr. Hawthorne; yet, from the extreme delicacy and difficulty of the subject, the Editor felt obliged to refuse compliance with this demand. Moreover, Mr. Hawthorne had frequently and emphatically expressed the hope that no one would attempt to write his Biography; and the Editor perceived that it would be impossible for any person, outside of his own domestic circle, to succeed in doing it, on account of his extreme reserve. But it was ungracious to do nothing, and therefore the Editor, believing that Mr. Hawthorne himself was alone capable of satisfactorily answering the affectionate call for some sketch of his life, concluded to publish as much as possible of his private records, and even extracts from his private letters, in order to gratify the desire of his friends and of literary artists to become more intimately acquainted with him. The Editor has been severely blamed and wondered at, in some instances, for allowing many things now published to see the light; but it has been a matter both of conscience and courtesy to withhold nothing that could be given up. Many of the journals were doubtless destroyed; for the earliest date found in his American papers was that of 1835.

The Editor has transcribed the manuscripts just as they were left, without making any new arrangement or altering any sequence,—merely omitting some passages, and being especially careful to preserve whatever could throw any light upon his character. To persons on a quest for characteristics, however, each of his books reveals a great many, and it is believed that with the aid of the Notes (both American and English) the Tales and Romances will make out a very complete and true picture of his individuality; and the Notes are often an open sesame to the artistic works.

Several thickly written pages of observations—fine and accurate etchings—have been omitted, sometimes because too personal with regard to himself or others, and sometimes because they were afterwards absorbed into one or another of the Romances or papers in Our Old Home. It seemed a pity not to give these original cartoons fresh from his mind, because they are so carefully finished at the first stroke. Yet, as Mr. Hawthorne chose his own way of presenting them to the public, it was thought better not to exhibit what he himself withheld. Besides, to any other than a fellow-artist they might seem mere repetitions.

It is very earnestly hoped that these volumes of notes—American, English, and presently Italian—will dispel an often-expressed opinion that Mr. Hawthorne was gloomy and morbid. He had the inevitable pensiveness and gravity of a person who possessed what a friend of his called "the awful power of insight"; but his mood was always cheerful and equal, and his mind peculiarly healthful, and the airy splendor of his wit and humor was the light of his home. He saw too far to be despondent, though his vivid sympathies and shaping imagination often made him sad in behalf of others....