Passages from the American Notebooks, Volume 2. 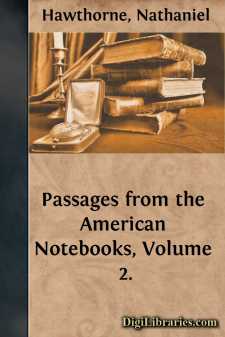 Brook Farm, Oak Hill, April 13th, 1841.—. . . . Here I am in a polar Paradise! I know not how to interpret this aspect of nature,—whether it be of good or evil omen to our enterprise. But I reflect that the Plymouth pilgrims arrived in the midst of storm, and stepped ashore upon mountain snowdrifts; and, nevertheless, they prospered, and became a great people,—and doubtless it will be the same with us. I laud my stars, however, that you will not have your first impressions of (perhaps) our future home from such a day as this. . . . Through faith, I persist in believing that Spring and Summer will come in their due season; but the unregenerated man shivers within me, and suggests a doubt whether I may not have wandered within the precincts of the Arctic Circle, and chosen my heritage among everlasting snows. . . . Provide yourself with a good stock of furs, and, if you can obtain the skin of a polar bear, you will find it a very suitable summer dress for this region. . . .

I have not yet taken my first lesson in agriculture, except that I went to see our cows foddered, yesterday afternoon. We have eight of our own; and the number is now increased by a transcendental heifer belonging to Miss Margaret Fuller. She is very fractious, I believe, and apt to kick over the milk-pail. . . . I intend to convert myself into a milkmaid this evening, but I pray Heaven that Mr. Ripley may be moved to assign me the kindliest cow in the herd, otherwise I shall perform my duty with fear and trembling. . . .

I like my brethren in affliction very well; and, could you see us sitting round our table at meal-times, before the great kitchen fire, you would call it a cheerful sight. Mrs. B——— is a most comfortable woman to behold. She looks as if her ample person were stuffed full of tenderness,—indeed, as if she were all one great, kind heart.

April 14th, 10 A. M.—. . . . I did not milk the cows last night, because Mr. Ripley was afraid to trust them to my hands, or me to their horns, I know not which. But this morning I have done wonders. Before breakfast, I went out to the barn and began to chop hay for the cattle, and with such "righteous vehemence," as Mr. Ripley says, did I labor, that in the space of ten minutes I broke the machine. Then I brought wood and replenished the fires; and finally went down to breakfast, and ate up a huge mound of buckwheat cakes. After breakfast, Mr. Ripley put a four-pronged instrument into my hands, which he gave me to understand was called a pitchfork; and he and Mr. Farley being armed with similar weapons, we all three commenced a gallant attack upon a heap of manure. This office being concluded, and I having purified myself, I sit down to finish this letter. . . .

Miss Fuller's cow hooks the other cows, and has made herself ruler of the herd, and behaves in a very tyrannical manner. . . . I shall make an excellent husbandman,—I feel the original Adam reviving within me.

April 16th.—. . . . Since I last wrote, there has been an addition to our community of four gentlemen in sables, who promise to be among our most useful and respectable members. They arrived yesterday about noon. Mr. Ripley had proposed to them to join us, no longer ago than that very morning. I had some conversation with them in the afternoon, and was glad to hear them express much satisfaction with their new abode and all the arrangements. They do not appear to be very communicative, however, —or perhaps it may be merely an external reserve, like my own, to shield their delicacy. Several of their prominent characteristics, as well as their black attire, lead me to believe that they are members of the clerical profession; but I have not yet ascertained from their own lips what has been the nature of their past lives. I trust to have much pleasure in their society, and, sooner or later, that we shall all of us derive great strength from our intercourse with them. I cannot too highly applaud the readiness with which these four gentlemen in black have thrown aside all the fopperies and flummeries which have their origin in a false state of society....