Passages from the American Notebooks, Volume 1 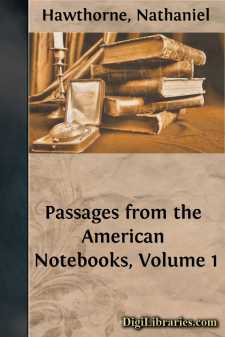 Salem, June 15, 1835.—A walk down to the Juniper. The shore of the coves strewn with bunches of sea-weed, driven in by recent winds. Eel-grass, rolled and bundled up, and entangled with it,—large marine vegetables, of an olive-color, with round, slender, snake-like stalks, four or five feet long, and nearly two feet broad: these are the herbage of the deep sea. Shoals of fishes, at a little distance from the shore, discernible by their fins out of water. Among the heaps of sea-weed there were sometimes small pieces of painted wood, bark, and other driftage. On the shore, with pebbles of granite, there were round or oval pieces of brick, which the waves had rolled about till they resembled a natural mineral. Huge stones tossed about, in every variety of confusion, some shagged all over with sea-weed, others only partly covered, others bare. The old ten-gun battery, at the outer angle of the Juniper, very verdant, and besprinkled with white-weed, clover, and buttercups. The juniper-trees are very aged and decayed and moss-grown. The grass about the hospital is rank, being trodden, probably, by nobody but myself. There is a representation of a vessel under sail, cut with a penknife, on the corner of the house.

Returning by the almshouse, I stopped a good while to look at the pigs,—a great herd,—who seemed to be just finishing their suppers. They certainly are types of unmitigated sensuality,—some standing in the trough, in the midst of their own and others' victuals,—some thrusting their noses deep into the food,—some rubbing their backs against a post,—some huddled together between sleeping and waking, breathing hard,—all wallowing about; a great boar swaggering round, and a big sow waddling along with her huge paunch. Notwithstanding the unspeakable defilement with which these strange sensualists spice all their food, they seem to have a quick and delicate sense of smell. What ridiculous-looking animals! Swift himself could not have imagined anything nastier than what they practise by the mere impulse of natural genius. Yet the Shakers keep their pigs very clean, and with great advantage. The legion of devils in the herd of swine,—what a scene it must have been!

Sunday evening, going by the jail, the setting sun kindled up the windows most cheerfully; as if there were a bright, comfortable light within its darksome stone wall.

June 18th.—A walk in North Salem in the decline of yesterday afternoon, —beautiful weather, bright, sunny, with a western or northwestern wind just cool enough, and a slight superfluity of heat. The verdure, both of trees and grass, is now in its prime, the leaves elastic, all life. The grass-fields are plenteously bestrewn with white-weed, large spaces looking as white as a sheet of snow, at a distance, yet with an indescribably warmer tinge than snow,—living white, intermixed with living green. The hills and hollows beyond the Cold Spring copiously shaded, principally with oaks of good growth, and some walnut-trees, with the rich sun brightening in the midst of the open spaces, and mellowing and fading into the shade,—and single trees, with their cool spot of shade, in the waste of sun: quite a picture of beauty, gently picturesque. The surface of the land is so varied, with woodland mingled, that the eye cannot reach far away, except now and then in vistas perhaps across the river, showing houses, or a church and surrounding village, in Upper Beverly. In one of the sunny bits of pasture, walled irregularly in with oak-shade, I saw a gray mare feeding, and, as I drew near, a colt sprang up from amid the grass,—a very small colt. He looked me in the face, and I tried to startle him, so as to make him gallop; but he stretched his long legs, one after another, walked quietly to his mother, and began to suck,—just wetting his lips, not being very hungry. Then he rubbed his head, alternately, with each hind leg. He was a graceful little beast.

I bathed in the cove, overhung with maples and walnuts, the water cool and thrilling. At a distance it sparkled bright and blue in the breeze and sun. There were jelly-fish swimming about, and several left to melt away on the shore. On the shore, sprouting amongst the sand and gravel, I found samphire, growing somewhat like asparagus....