Palaces and Courts of the Exposition 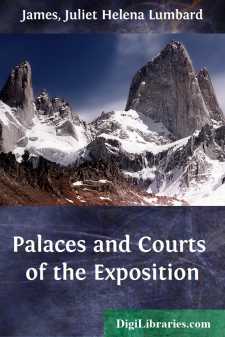 There is a hill-crowned city by a silver sea, near a Golden Gate. For ages the water has washed from an almost land-locked bay against this hill-crowned city, and on its northern side has created of the shore an amphitheatre stretching for some three miles to the western headlands.

Behind this amphitheatre rises, in terraces, the steep hills of this water-lashed city, and in part, a forest of pines stretches to the west. Man has flanked this reach of shore by two lowering forts, and in front, across the sapphire sea, one looks onto the long undulations of hills, climaxed by grand old Tamalpais.

Just three years ago and one saw in this same low-lying shore only a marshy stretch, with lagoons working their way far into the land - the home of the seagull.

There came a time when, had you looked closely, you would have seen coming thru the Golden Gate a phantom flotilla of caravels, freighted with clever ideas.

They had dug and delved with mighty Hercules and had created that great gap that has severed two continents. Then, leaving their work to be finished, they had sailed on to celebrate their triumph in the Land of El Dorado, the region of their desires.

In a shallop in front of these floating winged vessels, riding on the waves, came Venus, rowed by the fairies - in her hand the golden ball of opportunity.

The mermaids, the dolphins, the little sea-horses sported in the wake of these vessels, leaving a long line of foam and silver as they sped on.

Over the waves they came to the Golden Land of the Pacific. They moored their vessels by the fort-flanked shores, and stepping out upon the haunt of the seagull, they moved boldly across this unsightly stretch of wave-washed land.

Enterprise and Energy pushed ahead: the Fairy ever flitting near. At a signal from Enterprise the Fairy turned her wheel, Venus threw her golden ball of opportunity, and lo! out of the foam of the sea rose a Venus city with the round sea bubbles resting on the roofs.

One day a man appeared on the hilltop o'erlooking this wondrous city and by his magic power, being filled with music, with color-music, he cast a spell and behold a pastel city by the sea - such an one as only those who dream could think of; a city glowing with warmth of color, with a softness and mystical charm such as only the brain of Jules Guerin could produce.

He is the conductor of this wondrous symphony, this beautiful Mozart fantasia, and if you listen, you can hear the strains of the great beautiful melodies wafted now east, now west, now north, now south, rising to great climaxes, falling back to great chords of harmony, or, in an allegro movement, causing you almost to trip with delight in the joy of it all.

Your eye is enthralled with the beauty of the coloring. One sees turquoise green domes floating in a silver-moated ether, long colonnades of glacial ice columns leading to regions beyond, where quiet silver pools throw back the mirrored glories.

Battalions of daffodils holding their long sabers stand in the South Garden, making ready for the great festival. Soon those daffodils will raise their golden trumpets and will sound the fanfare at the opening of the Great Jubilee, and up will spring two hundred thousand wide-eyed yellow pansies to look and wonder at the marvelous beauty and help in the hallelujah chorus that will be one great poeon of joy - one splendid hymn of praise....