Outlines of Greek and Roman Medicine 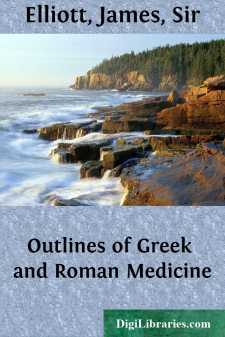 The origin of the healing art in Ancient Rome is shrouded in uncertainty. The earliest practice of medicine was undoubtedly theurgic, and common to all primitive peoples. The offices of priest and of medicine-man were combined in one person, and magic was invoked to take the place of knowledge. There is much scope for the exercise of the imagination in attempting to follow the course of early man in his efforts to bring plants into medicinal use. That some of the indigenous plants had therapeutic properties was often an accidental discovery, leading in the next place to experiment and observation. Cornelius Agrippa, in his book on occult philosophy, states that mankind has learned the use of many remedies from animals. It has even been suggested that the use of the enema was discovered by observing a long-beaked bird drawing up water into its beak, and injecting the water into the bowel. The practice of healing, crude and imperfect, progressed slowly in ancient times and was conducted in much the same way in Rome, and among the Egyptians, the Jews, the Chaldeans, Hindus and Parsees, and the Chinese and Tartars.

The Etruscans had considerable proficiency in philosophy and medicine, and to this people, as well as to the Sabines, the Ancient Romans were indebted for knowledge. Numa Pompilius, of Sabine origin, who was King of Rome 715 B.C., studied physical science, and, as Livy relates, was struck by lightning and killed as the result of his experiments, and it has therefore been inferred that these experiments related to the investigation of electricity. It is surprising to find in the Twelve Tables of Numa references to dental operations. In early times, it is certain that the Romans were more prone to learn the superstitions of other peoples than to acquire much useful knowledge. They were cosmopolitan in medical art as in religion. They had acquaintance with the domestic medicine known to all savages, a little rude surgery, and prescriptions from the Sibylline books, and had much recourse to magic. It was to Greece that the Romans first owed their knowledge of healing, and of art and science generally, but at no time did the Romans equal the Greeks in mental culture.

Pliny states that "the Roman people for more than six hundred years were not, indeed, without medicine, but they were without physicians." They used traditional family recipes, and had numerous gods and goddesses of disease and healing. Febris was the god of fever, Mephitis the god of stench; Fessonia aided the weary, and "Sweet Cloacina" presided over the drains. The plague-stricken appealed to the goddess Angeronia, women to Fluonia and Uterina. Ossipaga took care of the bones of children, and Carna was the deity presiding over the abdominal organs.