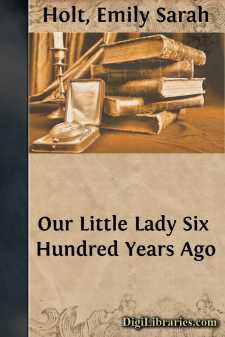 The afternoon service was over in Lincoln Cathedral, and the congregation were slowly filing out of the great west door. But that afternoon service was six hundred years ago, and both the Cathedral and the congregation would look very strange to us if we saw them now. Those days were well called the Dark Ages, and how dark they were we can scarcely realise in the present day. Let us fancy ourselves coming out of that west door, and try to picture what we should have seen there, six hundred years ago.

The Cathedral itself is hardly to be known. It is crowded with painted images and embroidered banners, and filled with the smoke and scent of burning incense. The clergy are habited, not in white surplices or in black gowns, but in large stiff cloaks—copes they are called—of scarlet silk, heavy with gold embroidery. The Bishop, who is in the pulpit, wears a cope of white, thick with masses of gold, and on his head is a white and gold mitre. How unlike that upper chamber, where the disciples gathered together after the crucifixion of their Master! Is it better or worse, do you ask? Well, I think if the Master were to come in, it would be easier to see Him in the quiet upper chamber, where there was nothing else to see, than in the perfumed and decorated Cathedral where there was so much else!

But now let us look at the congregation as they pass out. Are they all women? for all alike seem to wear long skirts and thick hoods: there are neither trousers, nor hats, nor bonnets. No, there is a fair sprinkling of men; but men and women dressed more alike then than they do now. You will see, if you look, that some of these long skirts are open in front, and you may catch a glimpse of a beard here and there under the hood. This is a poor woman who comes now: she wears a serge dress which has cost her about three-halfpence a yard, and a threadbare hood for which she may have given sixpence.

Are things so cheap, then? No, just the other way about; money is so dear. The wages of a mason or a bricklayer are about sixpence a week; haymakers have the same; reapers get from a shilling to half-a-crown, and mowers one and ninepence. The gentlemen who wait on the King himself only receive a shilling a day.

Here comes one of them, in a long green robe of shining silky stuff, which is called samite; round his neck is a curiously cut collar of dark red cloth, and in his hand he carries a white hood. Men do not confine themselves to the quiet, sober colours that we are accustomed to see; they are smarter than the ladies themselves. This knight, as he passes out, throws his gown back, before mounting his horse, and you see his yellow hose striped with black—trousers and stockings all in a piece, as it were—with low black shoes, and gilt spurs.

But who follows him?—this superbly dressed woman in rich blue glistening samite, with a black and gold hood, under which we see her hair bound with a golden fillet, and a necklace of costly pearls clasped round her throat—for it is a warm day, and she has not tied her hood....