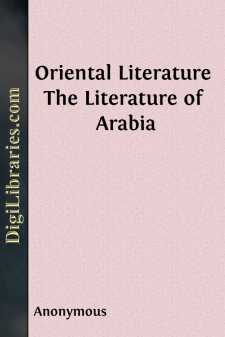 THE EARLY FORTUNES OF ANTAR

At the time the "Romance of Antar" opens, the most powerful and the best governed of the Bedouin tribes were those of the Absians and the Adnamians. King Zoheir, chief of the Absians, was firmly established upon his throne, so that the kings of other nations, who were subject to him, paid him tribute. The whole of Arabia in short became subject to the Absians, so that all the chiefs of other tribes and all inhabitants of the desert dreaded their power and depredations.

Under these circumstances, and as a consequence of a flagrant act of tyranny on the part of Zoheir, several chieftains, among whom was Shedad, a son of Zoheir, seceded from the Absian tribe, and set out to seek adventures, to attack other tribes, and to carry off their cattle and treasure. These chieftains arrived at the dwelling-place of a certain tribe, named Djezila, whom they fought with and pillaged. Amongst their booty was a black woman of extraordinary beauty, the mother of two children. Her name was Zebiba; her elder son was Djaris; her younger Shidoub. Shedad became passionately enamoured of this woman, and yielded all the rest of his share in the booty in order to obtain possession of her and her two children. He dwelt in the fields with this negress, whose sons took care of the cattle. In course of time Zebiba bore a son to Shedad. This child was born tawny as an elephant; his eyes were bleared, his head thick with hair, his features hard and fixed. The corners of his mouth drooped, his eyes started from his head, his bones were hard, his feet long; he had ears of prodigious size, and his glance flashed like fire. In other respects he resembled Shedad, who was transported with delight at the sight of his son, whom he named Antar.

Meanwhile the child waxed in strength, and his name soon became known. Then the companions of Shedad wished to dispute the possession of the boy with him, and King Zoheir was informed of the matter. He demanded that the boy should be brought into his presence, and Shedad complied. As soon as the king caught sight of this extraordinary child, he uttered a cry of astonishment, and flung him a piece of goat's flesh. At the same moment a dog, who happened to be in the tent, seized the meat and ran off with it. But Antar, filled with rage, pursued the animal, and, violently taking hold of him, drew his jaws apart, splitting the throat down to the shoulders, and thus recovered the meat. King Zoheir, in amazement, deferred the matter to the Cadi, who confirmed Shedad's possession of Zebiba, and her three children, Djaris, Shidoub, and Antar.

Shedad therefore provided a home for Zebiba, in order that his sons might be educated in their business of tending the herds. It was at this time that Antar began to develop his strength of body, his courage, and intelligence. When he was ten years of age he slew a wolf which threatened to attack the herds committed to his charge. Although brutal, headstrong, and passionate, he early exhibited a love of justice, and a disposition to protect the weak, especially women....