Oration on the Life and Character of Henry Winter Davis 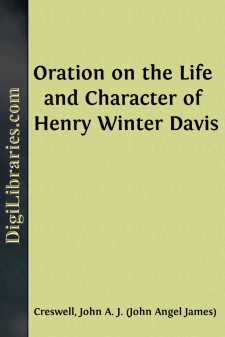 My Countrymen: On the 22d day of February, 1732, God gave to the world the highest type of humanity, in the person of George Washington. Combining within himself the better qualities of the soldier, sage, statesman, and patriot, alike brave, wise, discreet, and incorruptible, the common consent of mankind has awarded him the incomparable title of Father of his Country. Among all nations and in every clime the richest treasures of language have been exhausted in the effort to transmit to posterity a faithful record of his deeds. For him unfading laurels are secure, so long as letters shall survive and history shall continue to be the guide and teacher of civilized men. The whole human race has become the self-appointed guardian of his fame, and the name of Washington will be ever held, over all the earth, to be synonymous with the highest perfection attainable in public or private life, and coeternal with that immortal love to which reason and revelation have together toiled to elevate human aspirations—the love of liberty, restrained and guarded by law.

But in the presence of the Omnipotent how insignificant is the proudest and the noblest of men! Even Washington, who alone of his kind could fill that comprehensive epitome of General Henry Lee, so often on our lips, "First in war, first in peace, and first in the hearts of his countrymen," was allowed no exemption from the common lot of mortals. In the sixty-eighth year of his age he, too, paid the debt of nature.

The dread announcement of his demise sped over the land like a pestilence, burdening the very air with mourning, and carrying inexpressible sorrow to every household and every heart. The course of legislation was stopped in mid career to give expression to the grief of Congress, and by resolution, approved January 6, 1800, the 22d of February of that year was devoted to national humiliation and lamentation. This is, then, as well a day of sorrow as a day of rejoicing.

More recent calamities also remind us that death is universal king. Just ten days ago our great historian pronounced in this hall an impartial judgment upon the earthly career of him who, as savior of his country, will be counted as the compeer of Washington. Scarce have the orator's lingering tones been mellowed into silence, scarce has the glowing page whereon his words were traced lost the impress of his passing hand, yet we are again called into the presence of the Inexorable to crown one more illustrious victim with sacrificial flowers. Having taken up his lifeless body, as beautiful as the dead Absalom, and laid it in the tomb with becoming solemnity, we have assembled in the sight of the world to do deserved honor to the name and memory of Henry Winter Davis, a native of Annapolis, in the State of Maryland, but always proudly claiming to be no less than a citizen of the United States of America.

We have not convened in obedience to any formal custom, requiring us to assume an empty show of bereavement, in order that we may appear respectful to the departed....