One Snowy Night Long ago at Oxford 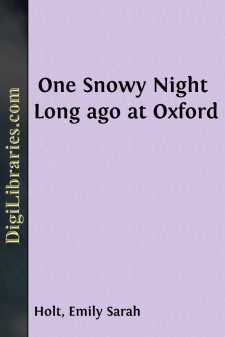 The story of the following pages is one of the least known yet saddest episodes in English history—the first persecution of Christians by Christians in this land. When Boniface went forth from England to evangelise Germany, he was received with welcome, and regarded as a saint: when Gerhardt came from Germany to restore the pure Gospel to England, he was cast out of the vineyard and slain.

The spirit of her who is drunk with the blood of the martyrs of Jesus is the same now that it was then. She does not ask if a man agree with the Word of God, but whether he agree with her. “When the Church has spoken”—this has been said by exalted ecclesiastical lips quite recently—“we cannot appeal to Scripture against her!”

But we Protestants can—we must—we will. The Church is not God, but man. The Bible is not the word of man, but the Word of God (One Thessalonians, two, verse 13; Ephesians, six, verse 17): therefore it must be paramount and unerring. Let us hold fast this our profession, not being moved away from the hope of the Gospel, nor entangled again with the yoke of bondage, but stablished in the faith, grounded and settled. “For we are made partakers of Christ, if we hold the beginning of our confidence stedfast unto the end.”

“For men must work, and women must weep,And the sooner ’tis over, the sooner to sleep.”Reverend Charles Kingsley.

It was not a cross voice that called, but it sounded like a very tired one. The voice which answered was much more fresh and cheerful.

“Is Romund come in yet?”

“I have not seen him, Mother.”

“Oh dear, those boys! They are never in the way when they are wanted.”

The speaker came forward and showed herself. She was a woman of some forty years or more, looking older than she was, and evidently very weary. She wore a plain untrimmed skirt of dark woollen stuff, short to the ankles, a long linen apron, and a blue hood over her head and shoulders. Resting her worn hands on the half-door, she looked drearily up and down the street, as if in languid hope of catching a glimpse of the boys who should have been there, and were not.

“Well, there’s no help for it!” she said at last, “Flemild, child, you must go for the water to-night.”

“I? O Mother!” The girl’s tone was one of manifest reluctance.

“It can’t be helped, child. Take Derette with you, and be back as quick as you can, before the dusk comes on. The lads should have been here to spare you, but they only think of their own pleasure. I don’t know what the world’s coming to, for my part.”

“Father Dolfin says it’s going to be burnt up,” said a third voice—that of a child—from the interior of the house.

“Time it was!” replied the mother bluntly. “There’s nought but trouble and sorrow in it—leastwise I’ve never seen much else. It’s just work, work, work, from morning to night, and often no rest to speak of from night to morning....