On the Study of Zoology 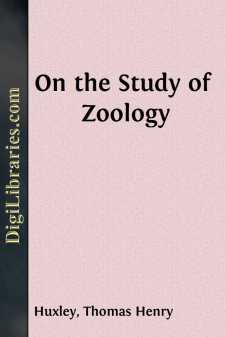 NATURAL HISTORY is the name familiarly applied to the study of the properties of such natural bodies as minerals, plants, and animals; the sciences which embody the knowledge man has acquired upon these subjects are commonly termed Natural Sciences, in contradistinction to other so-called "physical" sciences; and those who devote themselves especially to the pursuit of such sciences have been and are commonly termed "Naturalists."

Linnaeus was a naturalist in this wide sense, and his 'Systema Naturae' was a work upon natural history, in the broadest acceptation of the term; in it, that great methodising spirit embodied all that was known in his time of the distinctive characters of minerals, animals, and plants. But the enormous stimulus which Linnaeus gave to the investigation of nature soon rendered it impossible that any one man should write another 'Systema Naturae,' and extremely difficult for any one to become even a naturalist such as Linnaeus was.

Great as have been the advances made by all the three branches of science, of old included under the title of natural history, there can be no doubt that zoology and botany have grown in an enormously greater ratio than mineralogy; and hence, as I suppose, the name of "natural history" has gradually become more and more definitely attached to these prominent divisions of the subject, and by "naturalist" people have meant more and more distinctly to imply a student of the structure and function of living beings.

However this may be, it is certain that the advance of knowledge has gradually widened the distance between mineralogy and its old associates, while it has drawn zoology and botany closer together; so that of late years it has been found convenient (and indeed necessary) to associate the sciences which deal with vitality and all its phenomena under the common head of "biology"; and the biologists have come to repudiate any blood-relationship with their foster-brothers, the mineralogists.

Certain broad laws have a general application throughout both the animal and the vegetable worlds, but the ground common to these kingdoms of nature is not of very wide extent, and the multiplicity of details is so great, that the student of living beings finds himself obliged to devote his attention exclusively either to the one or the other. If he elects to study plants, under any aspect, we know at once what to call him. He is a botanist, and his science is botany. But if the investigation of animal life be his choice, the name generally applied to him will vary according to the kind of animals he studies, or the particular phenomena of animal life to which he confines his attention. If the study of man is his object, he is called an anatomist, or a physiologist, or an ethnologist; but if he dissects animals, or examines into the mode in which their functions are performed, he is a comparative anatomist or comparative physiologist. If he turns his attention to fossil animals, he is a palaeontologist. If his mind is more particularly directed to the specific description, discrimination, classification, and distribution of animals, he is termed a zoologist.

For the purpose of the present discourse, however, I shall recognise none of these titles save the last, which I shall employ as the equivalent of botanist, and I shall use the term zoology as denoting the whole doctrine of animal life, in contradistinction to botany, which signifies the whole doctrine of vegetable life....