On the Method of Zadig 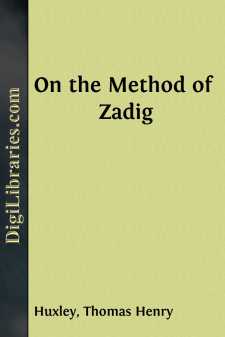 It is an usual and a commendable practice to preface the discussion of the views of a philosophic thinker by some account of the man and of the circumstances which shaped his life and coloured his way of looking at things; but, though Zadig is cited in one of the most important chapters of Cuvier's greatest work, little is known about him, and that little might perhaps be better authenticated than it is.

It is said that he lived at Babylon in the time of King Moabdar; but the name of Moabdar does not appear in the list of Babylonian sovereigns brought to light by the patience and the industry of the decipherers of cuneiform inscriptions in these later years; nor indeed am I aware that there is any other authority for his existence than that of the biographer of Zadig, one Arouet de Voltaire, among whose more conspicuous merits strict historical accuracy is perhaps hardly to be reckoned.

Happily Zadig is in the position of a great many other philosophers. What he was like when he was in the flesh, indeed whether he existed at all, are matters of no great consequence. What we care about in a light is that it shows the way, not whether it is lamp or candle, tallow or wax. Our only real interest in Zadig lies in the conceptions of which he is the putative father; and his biographer has stated these with so much clearness and vivacious illustration, that we need hardly feel a pang, even if critical research should prove King Moabdar and all the rest of the story to be unhistorical, and reduce Zadig himself to the shadowy condition of a solar myth.

Voltaire tells us that, disenchanted with life by sundry domestic misadventures, Zadig withdrew from the turmoil of Babylon to a secluded retreat on the banks of the Euphrates, where he beguiled his solitude by the study of nature. The manifold wonders of the world of life had a particular attraction for the lonely student; incessant and patient observation of the plants and animals about him sharpened his naturally good powers of observation and of reasoning; until, at length, he acquired a sagacity which enabled him to perceive endless minute differences among objects which, to the untutored eye, appeared absolutely alike.

It might have been expected that this enlargement of the powers of the mind and of its store of natural knowledge could tend to nothing but the increase of a man's own welfare and the good of his fellow-men. But Zadig was fated to experience the vanity of such expectations.

"One day, walking near a little wood, he saw, hastening thatway, one of the Queen's chief eunuchs, followed by a troop ofofficials, who appeared to be in the greatest anxiety, runninghither and thither like men distraught, in search of somelost treasure."'Young man,' cried the eunuch, 'have you seen the Queen's dog?'Zadig answered modestly, 'A bitch, I think, not a dog.''Quite right,' replied the eunuch; and Zadig continued, 'A verysmall spaniel who has lately had puppies; she limps with theleft foreleg, and has very long ears.' 'Ah! you have seen herthen,' said the breathless eunuch. 'No,' answered Zadig, 'I havenot seen her; and I really was not aware that the Queenpossessed a spaniel.'"By an odd coincidence, at the very same time, the handsomesthorse in the King's stables broke away from his groom in theBabylonian plain. The grand huntsman and all his staff wereseeking the horse with as much anxiety as the eunuch and hispeople the spaniel; and the grand huntsman asked Zadig if he hadnot seen the King's horse go that way....
Show more
Show less