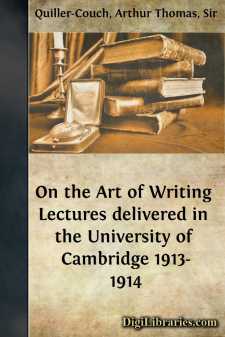 In all the long quarrel set between philosophy and poetry I know of nothing finer, as of nothing more pathetically hopeless, than Plato's return upon himself in his last dialogue 'The Laws.' There are who find that dialogue (left unrevised) insufferably dull, as no doubt it is without form and garrulous. But I think they will read it with a new tolerance, may-be even with a touch of feeling, if upon second thoughts they recognise in its twisting and turnings, its prolixities and repetitions, the scruples of an old man who, knowing that his time in this world is short, would not go out of it pretending to know more than he does, and even in matters concerning which he was once very sure has come to divine that, after all, as Renan says, 'La Verité consiste dans les nuances.' Certainly 'the mind's dark cottage battered and decayed' does in that last dialogue admit some wonderful flashes,

From Heaven descended to the low-roofed house     Of Socrates,

or rather to that noble 'banquet-hall deserted' which aforetime had entertained Socrates.

Suffer me, Mr Vice-Chancellor and Gentlemen, before reaching my text, to remind you of the characteristically beautiful setting. The place is Crete, and the three interlocutors—Cleinias a Cretan, Megillus a Lacedaemonian, and an Athenian stranger—have joined company on a pilgrimage to the cave and shrine of Zeus, from whom Minos, first lawgiver of the island, had reputedly derived not only his parentage but much parental instruction. Now the day being hot, even scorching, and the road from Cnossus to the Sacred Cave a long one, our three pilgrims, who have foregathered as elderly men, take it at their leisure, and propose to beguile it with talk upon Minos and his laws. 'Yes, and on the way,' promises the Cretan, 'we shall come to cypress-groves exceedingly tall and fair, and to green meadows, where we may repose ourselves and converse.' 'Good,' assents the Athenian. 'Ay, very good indeed, and better still when we arrive at them. Let us push on.'

So they proceed. I have said that all three are elderly men; that is, men who have had their opportunities, earned their wages, and so nearly earned their discharge that now, looking back on life, they can afford to see Man for what he really is—at his best a noble plaything for the gods. Yet they look forward, too, a little wistfully. They are of the world, after all, and nowise so tired of it, albeit disillusioned, as to have lost interest in the game or in the young who will carry it on. So Minos and his laws soon get left behind, and the talk (as so often befalls with Plato) is of the perfect citizen and how to train him—of education, in short; and so, as ever with Plato, we are back at length upon the old question which he could never get out of his way—What to do with the poets?

It scarcely needs to be said that the Athenian has taken hold of the conversation, and that the others are as wax in his hands....