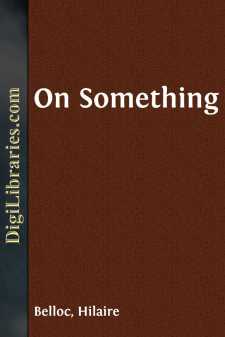 A PLEA FOR THE SIMPLER DRAMA

It is with the drama as with plastic art and many other things: the plain man feels that he has a right to put in his word, but he is rather afraid that the art is beyond him, and he is frightened by technicalities.

After all, these things are made for the plain man; his applause, in the long run and duly tested by time, is the main reward of the dramatist as of the painter or the sculptor. But if he is sensible he knows that his immediate judgment will be crude. However, here goes.

The plain man sees that the drama of his time has gradually passed from one phase to another of complexity in thought coupled with simplicity of incident, and it occurs to him that just one further step is needed to make something final in British art. We seem to be just on the threshold of something which would give Englishmen in the twentieth century something of the fullness that characterized the Elizabethans: but somehow or other our dramatists hesitate to cross that threshold. It cannot be that their powers are lacking: it can only be some timidity or self-torture which it is the business of the plain man to exorcise.

If I may make a suggestion in this essay to the masters of the craft it is that the goal of the completely modern thing can best be reached by taking the very simplest themes of daily life—things within the experience of the ordinary citizen—and presenting them in the majestic traditional cadence of that peculiarly English medium, blank verse.

As to the themes taken from the everyday life of middle-class men and women like ourselves, it is true that the lives of the wealthy afford more incident, and that there is a sort of glamour about them which it is difficult to resist. But with a sufficient subtlety the whole poignancy of the lives led by those who suffer neither the tragedies of the poor nor the exaltation of the rich can be exactly etched. The life of the professional middle-class, of the business man, the dentist, the money-lender, the publisher, the spiritual pastor, nay of the playwright himself, might be put upon the stage—and what a vital change would be here! Here would be a kind of literary drama of which the interest would lie in the struggle, the pain, the danger, and the triumph which we all so intimately know, and next in the satisfaction (which we now do not have) of the mimetic sense—the satisfaction of seeing a mirror held up to a whole audience composed of the very class represented upon the stage.

I have seen men of wealth and position absorbed in plays concerning gambling, cruelty, cheating, drunkenness, and other sports, and so absorbed chiefly because they saw themselves depicted upon the stage; and I ask, Would not my fellows and myself largely remunerate a similar opportunity? For though the rich go repeatedly to the play, yet the middle-class are so much more numerous that the difference is amply compensated.

I think we may take it, then, that an experiment in the depicting of professional life would, even from the financial standpoint, be workable; and I would even go so far as to suggest that a play could be written in which there did not appear one single lord, general, Member of Parliament, baronet, professional beauty, usurer (upon a large scale at least) or Cabinet Minister....