Old Ticonderoga, a Picture of the Past (From: "The Snow Image and Other Twice-Told Tales") 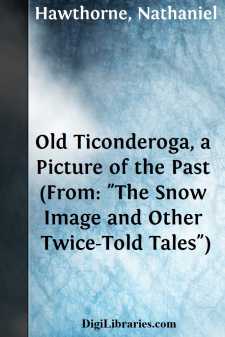 The greatest attraction, in this vicinity, is the famous old fortress of Ticonderoga, the remains of which are visible from the piazza of the tavern, on a swell of land that shuts in the prospect of the lake. Those celebrated heights, Mount Defiance and Mount Independence, familiar to all Americans in history, stand too prominent not to be recognized, though neither of them precisely corresponds to the images excited by their names. In truth, the whole scene, except the interior of the fortress, disappointed me. Mount Defiance, which one pictures as a steep, lofty, and rugged hill, of most formidable aspect, frowning down with the grim visage of a precipice on old Ticonderoga, is merely a long and wooded ridge; and bore, at some former period, the gentle name of Sugar Hill. The brow is certainly difficult to climb, and high enough to look into every corner of the fortress. St. Clair's most probable reason, however, for neglecting to occupy it, was the deficiency of troops to man the works already constructed, rather than the supposed inaccessibility of Mount Defiance. It is singular that the French never fortified this height, standing, as it does, in the quarter whence they must have looked for the advance of a British army.

In my first view of the ruins, I was favored with the scientific guidance of a young lieutenant of engineers, recently from West Point, where he had gained credit for great military genius. I saw nothing but confusion in what chiefly interested him; straight lines and zigzags, defence within defence, wall opposed to wall, and ditch intersecting ditch; oblong squares of masonry below the surface of the earth, and huge mounds, or turf-covered hills of stone, above it. On one of these artificial hillocks, a pine-tree has rooted itself, and grown tall and strong, since the banner-staff was levelled. But where my unmilitary glance could trace no regularity, the young lieutenant was perfectly at home. He fathomed the meaning of every ditch, and formed an entire plan of the fortress from its half-obliterated lines. His description of Ticonderoga would be as accurate as a geometrical theorem, and as barren of the poetry that has clustered round its decay. I viewed Ticonderoga as a place of ancient strength, in ruins for half a century: where the flags of three nations had successively waved, and none waved now; where armies had struggled, so long ago that the bones of the slain were mouldered; where Peace had found a heritage in the forsaken haunts of War. Now the young West-Pointer, with his lectures on ravelins, counterscarps, angles, and covered ways, made it an affair of brick and mortar and hewn stone, arranged on certain regular principles, having a good deal to do with mathematics, but nothing at all with poetry.

I should have been glad of a hoary veteran to totter by my side, and tell me, perhaps, of the French garrisons and their Indian allies,—of Abercrombie, Lord Howe, and Amherst,—of Ethan Allen's triumph and St. Clair's surrender. The old soldier and the old fortress would be emblems of each other. His reminiscences, though vivid as the image of Ticonderoga in the lake, would harmonize with the gray influence of the scene. A survivor of the long-disbanded garrisons, though but a private soldier, might have mustered his dead chiefs and comrades,—some from Westminster Abbey, and English churchyards, and battle-fields in Europe,—others from their graves here in America,—others, not a few, who lie sleeping round the fortress; he might have mustered them all, and bid them march through the ruined gateway, turning their old historic faces on me, as they passed. Next to such a companion, the best is one's own fancy.

At another visit I was alone, and, after rambling all over the ramparts, sat down to rest myself in one of the roofless barracks. These are old French structures, and appear to have occupied three sides of a large area, now overgrown with grass, nettles, and thistles. The one in which I sat was long and narrow, as all the rest had been, with peaked gables. The exterior walls were nearly entire, constructed of gray, flat, unpicked stones, the aged strength of which promised long to resist the elements, if no other violence should precipitate their fall.—The roof, floors, partitions, and the rest of the wood-work had probably been burnt, except some bars of stanch old oak, which were blackened with fire, but still remained imbedded into the window-sills and over the doors....