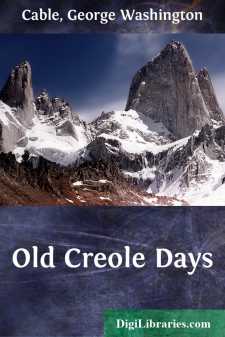 CHAPTER I. AN OLD HOUSE.

A few steps from the St. Charles Hotel, in New Orleans, brings you to and across Canal Street, the central avenue of the city, and to that corner where the flower-women sit at the inner and outer edges of the arcaded sidewalk, and make the air sweet with their fragrant merchandise. The crowdвЂ”and if it is near the time of the carnival it will be greatвЂ”will follow Canal Street.

But you turn, instead, into the quiet, narrow way which a lover of Creole antiquity, in fondness for a romantic past, is still prone to call the Rue Royale. You will pass a few restaurants, a few auction-rooms, a few furniture warehouses, and will hardly realize that you have left behind you the activity and clatter of a city of merchants before you find yourself in a region of architectural decrepitude, where an ancient and foreign-seeming domestic life, in second stories, overhangs the ruins of a former commercial prosperity, and upon every thing has settled down a long sabbath of decay. The vehicles in the street are few in number, and are merely passing through; the stores are shrunken into shops; you see here and there, like a patch of bright mould, the stall of that significant fungus, the Chinaman. Many great doors are shut and clamped and grown gray with cobweb; many street windows are nailed up; half the balconies are begrimed and rust-eaten, and many of the humid arches and alleys which characterize the older Franco-Spanish piles of stuccoed brick betray a squalor almost oriental.

Yet beauty lingers here. To say nothing of the picturesque, sometimes you get sight of comfort, sometimes of opulence, through the unlatched wicket in some porte-cochereвЂ”red-painted brick pavement, foliage of dark palm or pale banana, marble or granite masonry and blooming parterres; or through a chink between some pair of heavy batten window-shutters, opened with an almost reptile wariness, your eye gets a glimpse of lace and brocade upholstery, silver and bronze, and much similar rich antiquity.

The faces of the inmates are in keeping; of the passengers in the street a sad proportion are dingy and shabby; but just when these are putting you off your guard, there will pass you a womanвЂ”more likely two or threeвЂ”of patrician beauty.

Now, if you will go far enough down this old street, you will see, as you approach its intersection with вЂ”вЂ”. Names in that region elude one like ghosts.

However, as you begin to find the way a trifle more open, you will not fail to notice on the right-hand side, about midway of the square, a small, low, brick house of a story and a half, set out upon the sidewalk, as weather-beaten and mute as an aged beggar fallen asleep. Its corrugated roof of dull red tiles, sloping down toward you with an inward curve, is overgrown with weeds, and in the fall of the year is gay with the yellow plumes of the golden-rod. You can almost touch with your cane the low edge of the broad, overhanging eaves. The batten shutters at door and window, with hinges like those of a postern, are shut with a grip that makes one's knuckles and nails feel lacerated....