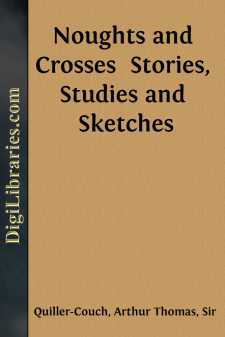 It was not so much a day as a burning, fiery furnace. The roar of London's traffic reverberated under a sky of coppery blue; the pavements threw out waves of heat, thickened with the reek of restaurants and perfumery shops; and dust became cinders, and the wearing of flesh a weariness. Streams of sweat ran from the bellies of 'bus-horses when they halted. Men went up and down with unbuttoned waistcoats, turned into drinking-bars, and were no sooner inside than they longed to be out again, and baking in an ampler oven. Other men, who had given up drinking because of the expense, hung about the fountains in Trafalgar Square and listened to the splash of running water. It was the time when London is supposed to be empty; and when those who remain in town feel there is not room for a soul more.

We were eleven inside the omnibus when it pulled up at Charing Cross, so that legally there was room for just one more. I had travelled enough in omnibuses to know my fellow-passengers by heart— a governess with some sheets of music in her satchel; a minor actress going to rehearsal; a woman carrying her incurable complaint for the hundredth time to the hospital; three middle-aged city clerks; a couple of reporters with weak eyes and low collars; an old loose-cheeked woman exhaling patchouli; a bald-headed man with hairy hands, a violent breast-pin, and the indescribable air of a matrimonial agent. Not a word passed. We were all failures in life, and could not trouble to dissemble it, in that heat. Moreover, we were used to each other, as types if not as persons, and had lost curiosity. So we sat listless, dispirited, drawing difficult breath and staring vacuously. The hope we shared in common—that nobody would claim the vacant seat—was too obvious to be discussed.

But at Charing Cross the twelfth passenger got in—a boy with a stick, and a bundle in a blue handkerchief. He was about thirteen; bound for the docks, we could tell at a glance, to sail on his first voyage; and, by the way he looked about, we could tell as easily that in stepping outside Charing Cross Station he had set foot on London stones for the first time. When we pulled up, he was standing on the opposite pavement with dazed eyes like a hare's, wondering at the new world—the hansoms, the yelling news-boys, the flower-women, the crowd pushing him this way and that, the ugly shop-fronts, the hurry and stink and din of it all. Then, hailing our 'bus, he started to run across—faltered—almost dropped his bundle—was snatched by our conductor out of the path of a running hansom, and hauled on board. His eyelids were pink and swollen; but he was not crying, though he wanted to. Instead, he took a great gulp, as he pushed between our knees to his seat, and tried to look brave as a lion.

The passengers turned an incurious, half-resentful stare upon him, and then repented. I think that more than one of us wanted to speak, but dared not.

It was not so much the little chap's look. But to the knot of his sea-kit there was tied a bunch of cottage-flowers—sweet williams, boy's love, love-lies-bleeding, a few common striped carnations, and a rose or two—and the sight and smell of them in that frowsy 'bus were like tears on thirsty eyelids....