Notes on My Books 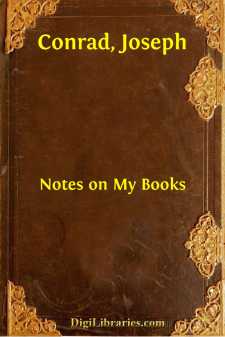 I am informed that in criticizing that literature which preys on strange people and prowls in far-off countries, under the shade of palms, in the unsheltered glare of sunbeaten beaches, amongst honest cannibals and the more sophisticated pioneers of our glorious virtues, a lady—distinguished in the world of letters—summed up her disapproval of it by saying that the tales it produced were "de-civilized." And in that sentence not only the tales but, I apprehend, the strange people and the far-off countries also, are finally condemned in a verdict of contemptuous dislike.

A woman's judgment: intuitive, clever, expressed with felicitous charm—infallible. A judgment that has nothing to do with justice. The critic and the judge seems to think that in those distant lands all joy is a yell and a war dance, all pathos is a howl and a ghastly grin of filed teeth, and that the solution of all problems is found in the barrel of a revolver or on the point of an assegai. And yet it is not so. But the erring magistrate may plead in excuse the misleading nature of the evidence.

The picture of life, there as here, is drawn with the same elaboration of detail, coloured with the same tints. Only in the cruel serenity of the sky, under the merciless brilliance of the sun, the dazzled eye misses the delicate detail, sees only the strong outlines, while the colours, in the steady light, seem crude and-without shadow. Nevertheless it is the same picture.

And there is a bond between us and that humanity so far away. I am speaking here of men and women—not of the charming and graceful phantoms that move about in our mud and smoke and are softly luminous with the radiance of all our virtues; that are possessed of all refinements, of all sensibilities, of all wisdom—but, being only phantoms, possess no heart.

The sympathies of those are (probably) with the immortals: with the angels above or the devils below. I am content to sympathize with common mortals, no matter where they live; in houses or in tents, in the streets under a fog, or in the forests behind the dark line of dismal mangroves that fringe the vast solitude of the sea. For, their land—like ours—lies under the inscrutable eyes of the Most High. Their hearts—like ours—must endure the load of the gifts from Heaven: the curse of facts and the blessing of illusions, the bitterness of our wisdom and the deceptive consolation of our folly.

AN OUTCAST OF THE ISLANDS

"An Outcast of the Islands" is my second novel in the absolute sense of the word; second in conception, second in execution, second as it were in its essence. There was no hesitation, half-formed plan, vague idea, or the vaguest reverie of anything else between it and "Almayer's Folly." The only doubt I suffered from, after the publication of "Almayer's Folly," was whether I should write another line for print. Those days, now grown so dim, had their poignant moments. Neither in my mind nor in my heart had I then given up the sea. In truth I was clinging to it desperately, all the more desperately because, against my will, I could not help feeling that there was something changed in my relation to it. "Almayer's Folly" had been finished and done with. The mood itself was gone. But it had left the memory of an experience that, both in thought and emotion, was unconnected with the sea, and I suppose that part of my moral being which is rooted in consistency was badly shaken. I was a victim of contrary stresses which produced a state of immobility. I gave myself up to indolence. Since it was impossible for me to face both ways I had elected to face nothing. The discovery of new values in life is a very chaotic experience; there is a tremendous amount of jostling and confusion and a momentary feeling of darkness....