Nostromo, a Tale of the Seaboard 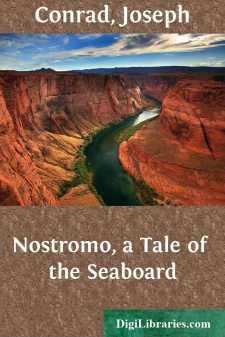 "Nostromo" is the most anxiously meditated of the longer novels which belong to the period following upon the publication of the "Typhoon" volume of short stories.

I don't mean to say that I became then conscious of any impending change in my mentality and in my attitude towards the tasks of my writing life. And perhaps there was never any change, except in that mysterious, extraneous thing which has nothing to do with the theories of art; a subtle change in the nature of the inspiration; a phenomenon for which I can not in any way be held responsible. What, however, did cause me some concern was that after finishing the last story of the "Typhoon" volume it seemed somehow that there was nothing more in the world to write about.

This so strangely negative but disturbing mood lasted some little time; and then, as with many of my longer stories, the first hint for "Nostromo" came to me in the shape of a vagrant anecdote completely destitute of valuable details.

As a matter of fact in 1875 or '6, when very young, in the West Indies or rather in the Gulf of Mexico, for my contacts with land were short, few, and fleeting, I heard the story of some man who was supposed to have stolen single-handed a whole lighter-full of silver, somewhere on the Tierra Firme seaboard during the troubles of a revolution.

On the face of it this was something of a feat. But I heard no details, and having no particular interest in crime qua crime I was not likely to keep that one in my mind. And I forgot it till twenty-six or seven years afterwards I came upon the very thing in a shabby volume picked up outside a second-hand book-shop. It was the life story of an American seaman written by himself with the assistance of a journalist. In the course of his wanderings that American sailor worked for some months on board a schooner, the master and owner of which was the thief of whom I had heard in my very young days. I have no doubt of that because there could hardly have been two exploits of that peculiar kind in the same part of the world and both connected with a South American revolution.

The fellow had actually managed to steal a lighter with silver, and this, it seems, only because he was implicitly trusted by his employers, who must have been singularly poor judges of character. In the sailor's story he is represented as an unmitigated rascal, a small cheat, stupidly ferocious, morose, of mean appearance, and altogether unworthy of the greatness this opportunity had thrust upon him. What was interesting was that he would boast of it openly.

He used to say: "People think I make a lot of money in this schooner of mine. But that is nothing. I don't care for that. Now and then I go away quietly and lift a bar of silver. I must get rich slowly—you understand."

There was also another curious point about the man. Once in the course of some quarrel the sailor threatened him: "What's to prevent me reporting ashore what you have told me about that silver?"

The cynical ruffian was not alarmed in the least....