North American Yellow Bats, 'Dasypterus,' And a List of the Named Kinds Of the Genus Lasiurus Gray 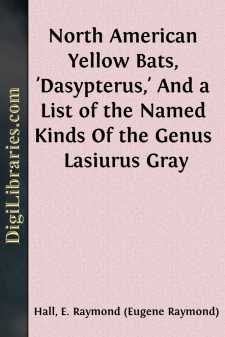 The kind of yellow bat first to be given a distinctive name was the smaller of the two species that occur in North America. It was named Nycticejus ega in 1856 (p. 73) by Gervais on the basis of material from the state of Amazonas, Brazil, South America, but was early recognized as occurring also in North America (in the sense that México and Central America, including Panamá, are parts of North America). More than 40 years elapsed before subspecific names were proposed for the North American populations; Thomas named Dasypterus ega xanthinus in 1897 (p. 544) from Baja California, and Dasypterus ega panamensis in 1901 (p. 246) from Panamá.

The larger of the two North American species was named Lasiurus intermedius in 1862 (p. 246) by H. Allen on the basis of material from extreme northeastern México. Another alleged species, Dasypterus floridanus, was named in 1902 (p. 392) by Miller from Florida, but as set forth below it is only a subspecies of L. intermedius, a species that is seemingly limited to parts of the North American mainland and Cuba.

A third species, Atalapha egregia, allegedly allied to the small yellow bat, L. ega, was named in 1871 (p. 912) by Peters from Santa Catarina, Brazil, but Handley (1960:473) thinks that L. egregius is allied instead to the red bats. The species L. egregius has not been studied in connection with the observations reported below.

Bats of the genus concerned were given the generic name Nycteris by Borkhausen in 1797 (p. 66), and the name Lasiurus by Gray in 1831 (p. 38). For much of the latter part of the 19th century the generic name Atalapha proposed by Rafinesque in 1814 (p. 12) was used because it antedated the name Lasiurus. In this period Harrison Allen (1894:137) raised to generic rank the name Dasypterus that had been proposed by Peters in 1871 (p. 912) only as a subgenus for the yellow bats. Since 1894 the yellow bats ordinarily have borne the generic name Dasypterus. The red bats and the hoary bat continued to be referred to as of the genus Atalapha until early in the 20th century when it was decided that a European bat of another genus was technically the basis for the name Atalapha. Thereupon Lasiurus was again used in the belief that it was the earliest available name for the bats concerned. But in 1909 (p. 90) Miller showed that the name Lasiurus was preoccupied by Nycteris Borkhausen, 1797 (p. 66). From 1909 until 1914 in conformance with the Law of Priority Nycteris was used for the red bat and the hoary bat.

At this point it is desirable to digress and indicate why and how the Law of Priority came into being. In the 19th century different technical names were used for the same kind of animal depending on the opinions of individual authors....