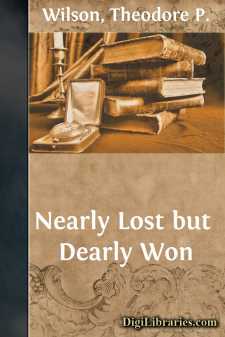 Certainly, Mr Tankardew was not a pattern of cleanliness, either in his house or his person. Someone had said of him sarcastically, “that there was nothing clean in his house but his towels;” and there was a great deal of truth in the remark. He seemed to dwell in an element of cobwebs; the atmosphere in which he lived, rather than breathed, was apparently a mixture of fog and dust. Everything he had on was faded—everything that he had about him was faded—the only dew that seemed to visit the jaded-looking shrubs in the approach to his dwelling was mildew. Dilapidation and dinginess went hand-in-hand everywhere: the railings round the house were dilapidated—some had lost there points, others came to an abrupt conclusion a few inches above the stone-work from which they sprang; the steps were dilapidated—one of them rocked as you set your foot upon it, and the others sloped inwards so as to hold treacherous puddles in wet weather to entrap unwary visitors; the entrance hall was dilapidated; if ever there had been a pattern to the paper, it had now retired out of sight and given place to irregular stains, which looked something like a vast map of a desolate country, all moors and swamps; the doors were dilapidated, fitting so badly, that when the front door opened a sympathetic clatter of all the lesser ones rang through the house; the floors were dilapidated, and afforded ample convenience for easy egress and ingress to the flourishing colonies of rats and mice which had established themselves on the premises; and above all, Mr Tankardew himself was dilapidated in his dress, and in his whole appearance and habits—his very voice was dilapidated, and his words slipshod and slovenly.

And yet Mr Tankardew was a man of education and a gentleman, and you knew it before you had been five minutes in his company. He was the owner of the house he lived in, on the outskirts of the small town of Hopeworth, and also of considerable property in the neighbourhood. Amongst other possessions, he was the landlord of two houses of some pretensions, a little out in the country, which were prettily situated in the midst of shrubberies and orchards. In one of these houses lived a Mr Rothwell, a gentleman of independent means; in the other a Mrs Franklin, the widow of an officer, with her daughter Mary, now about fifteen years of age.

Mr Tankardew had settled in his present residence some ten years since. Why he bought it nobody knew, nor was likely to know; all that people were sure of was that he had bought it, and pretty cheap too, for it was not a house likely to attract any one who appreciated comfort or liveliness; moreover, current report said that it was haunted. Still, it was for sale, and it passed somehow or other into Mr Tankardew’s hands, and Mr Tankardew’s hands and whole person passed into it; and here he was now with his one old servant, Molly Gilders, a shade more dingy and dilapidated than himself. Several persons put questions to Molly about her master, but found it a very discouraging business, so they gave up the attempt as hopeless, and it remained an unexplained mystery why Mr Tankardew came to Hopeworth, and where he came from....