by United States. Executive Office of the President 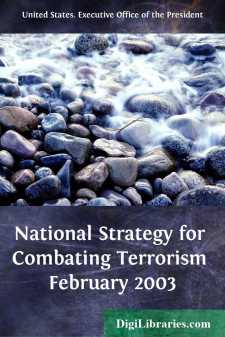 "No group or nation should mistake America's intentions:We will not rest until terrorist groups of global reachhave been found, have been stopped, and have been defeated."PRESIDENT GEORGE W. BUSHNOVEMBER 6, 2001

The terrorist attacks of September 11, 2001, in Washington, D.C., New York City, and Pennsylvania were acts of war against the United States of America and its allies, and against the very idea of civilized society. No cause justifies terrorism. The world must respond and fight this evil that is intent on threatening and destroying our basic freedoms and our way of life. Freedom and fear are at war.

The enemy is not one person. It is not a single political regime. Certainly it is not a religion. The enemy is terrorism--premeditated, politically motivated violence perpetrated against noncombatant targets by subnational groups or clandestine agents. Those who employ terrorism, regardless of their specific secular or religious objectives, strive to subvert the rule of law and effect change through violence and fear. These terrorists also share the misguided belief that killing, kidnapping, extorting, robbing, and wreaking havoc to terrorize people are legitimate forms of political action.

The struggle against international terrorism is different from any other war in our history. We will not triumph solely or even primarily through military might. We must fight terrorist networks, and all those who support their efforts to spread fear around the world, using every instrument of national power--diplomatic, economic, law enforcement, financial, information, intelligence, and military. Progress will come through the persistent accumulation of successes--some seen, some unseen. And we will always remain vigilant against new terrorist threats. Our goal will be reached when Americans and other civilized people around the world can lead their lives free of fear from terrorist attacks.

There will be no quick or easy end to this conflict. At the same time, the United States, will not allow itself to be held hostage by terrorists. Combating terrorism and securing the U.S. homeland from future attacks are our top priorities. But they will not be our only priorities. This strategy supports the National Security Strategy of the United States. As the National Security Strategy highlights, we live in an age with tremendous opportunities to foster a world consistent with interests and values embraced by the United States and freedom-loving people around the world. And we will seize these opportunities.

This combating terrorism strategy further elaborates on Section III of the the National Security Strategy by expounding on our need to destroy terrorist organizations, win the "war of ideas," and strengthen America's security at home and abroad. While the National Strategy for Homeland Security focuses on preventing terrorist attacks within the United States, the National Strategy for Combating Terrorism focuses on identifying and defusing threats before they reach our borders....