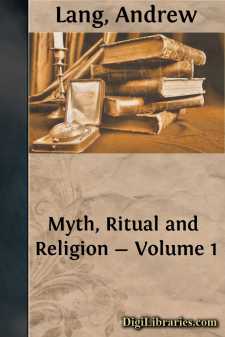 When this book first appeared (1886), the philological school of interpretation of religion and myth, being then still powerful in England, was criticised and opposed by the author. In Science, as on the Turkish throne of old, "Amurath to Amurath succeeds"; the philological theories of religion and myth have now yielded to anthropological methods. The centre of the anthropological position was the "ghost theory" of Mr. Herbert Spencer, the "Animistic" theory of Mr. E. R. Tylor, according to whom the propitiation of ancestral and other spirits leads to polytheism, and thence to monotheism. In the second edition (1901) of this work the author argued that the belief in a "relatively supreme being," anthropomorphic was as old as, and might be even older, than animistic religion. This theory he exhibited at greater length, and with a larger collection of evidence, in his Making of Religion.

Since 1901, a great deal of fresh testimony as to what Mr. Howitt styles the "All Father" in savage and barbaric religions has accrued. As regards this being in Africa, the reader may consult the volumes of the New Series of the Journal of the Anthropological Institute, which are full of African evidence, not, as yet, discussed, to my knowledge, by any writer on the History of Religion. As late as Man, for July, 1906, No. 66, Mr. Parkinson published interesting Yoruba legends about Oleron, the maker and father of men, and Oro, the Master of the Bull Roarer.

The books of Messrs. Spencer and Gillen also present much evidence as to a previously unknown form of totemism, in which the totem is not hereditary, and does not regulate marriage. This prevails among the Arunta "nation," and the Kaitish tribe. In the opinion of Mr. Spencer (Report Australian Association for Advancement of Science, 1904) and of Mr. J. G. Frazer (Fortnightly Review, September, 1905), this is the earliest surviving form of totemism, and Mr. Frazer suggests an animistic origin for the institution. I have criticised these views in The Secret of the Totem (1905), and proposed a different solution of the problem. (See also "Primitive and Advanced Totemism" in Journal of the Anthropological Institute, July, 1906.) In the works mentioned will be found references to other sources of information as to these questions, which are still sub judice. Mrs. Bates, who has been studying the hitherto almost unknown tribes of Western Australia, promises a book on their beliefs and institutions, and Mr....