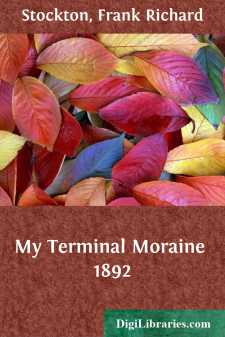 A man's birth is generally considered the most important event of his existence, but I truly think that what I am about to relate was more important to me than my entrance into this world; because, had not these things happened, I am of the opinion that my life would have been of no value to me and my birth a misfortune.

My father, Joshua Cuthbert, died soon after I came to my majority, leaving me what he had considered a comfortable property. This consisted of a large house and some forty acres of land, nearly the whole of which lay upon a bluff, which upon three sides descended to a little valley, through which ran a gentle stream. I had no brothers or sisters. My mother died when I was a boy, and I, Walter Cuthbert, was left the sole representative of my immediate family.

My estate had been a comfortable one to my father, because his income from the practice of his profession as a physician enabled him to keep it up and provide satisfactorily for himself and me. I had no profession and but a very small income, the result of a few investments my father had made. Left to myself, I felt no inducement to take up any profession or business. My wants were simple, and for a few years I lived without experiencing any inconvenience from the economies which I was obliged to practice. My books, my dog, my gun and my rod made life pass very pleasantly to me, and the subject of an increase of income never disturbed my mind.

But as time passed on the paternal home began to present an air of neglect and even dilapidation, which occasionally attracted my attention and caused, as I incidentally discovered, a great deal of unfavorable comment among my neighbors, who thought that I should go to work and at least earn money enough to put the house and grounds in a condition which should not be unworthy the memory of the good Dr. Cuthbert. In fact, I began to be looked upon as a shiftless young man; and, now and then, I found a person old enough and bold enough to tell me so.

But, instead of endeavoring to find some suitable occupation by which I might better my condition and improve my estate, I fell in love, which, in the opinion of my neighbors, was the very worst thing that could have happened to me at this time. I lived in a thrifty region, and for a man who could not support himself to think of taking upon him the support of a wife, especially such a wife as Agnes Havelot would be, was considered more than folly and looked upon as a crime. Everybody knew that I was in love with Miss Havelot, for I went to court her as boldly as I went to fish or shoot. There was a good deal of talk about it, and this finally came to the ears of Mr. Havelot, my lady's father, who, thereupon, promptly ordered her to have no more to do with me.

The Havelot estate, which adjoined mine, was a very large one, containing hundreds and hundreds of acres; and the Havelots were rich, rich enough to frighten any poor young man of marrying intent. But I did not appreciate the fact that I was a poor young man. I had never troubled my head about money as it regarded myself, and I now did not trouble my head about it as it regarded Agnes. I loved her, I hoped she loved me, and all other considerations were thrown aside. Mr. Havelot, however, was a man of a different way of thinking.

It was a little time before I became convinced that the decision of Agnes's father, that there should be no communication between that dear girl and myself, really meant anything....