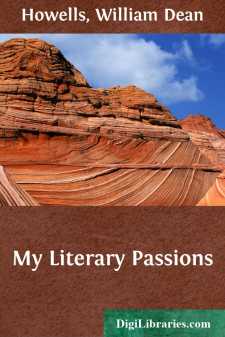 The papers collected here under the name of 'My Literary Passions' were printed serially in a periodical of such vast circulation that they might well have been supposed to have found there all the acceptance that could be reasonably hoped for them. Nevertheless, they were reissued in a volume the year after they first appeared, in 1895, and they had a pleasing share of such favor as their author's books have enjoyed. But it is to be doubted whether any one liked reading them so much as he liked writing them—say, some time in the years 1893 and 1894, in a New York flat, where he could look from his lofty windows over two miles and a half of woodland in Central Park, and halloo his fancy wherever he chose in that faery realm of books which he re-entered in reminiscences perhaps too fond at times, and perhaps always too eager for the reader's following. The name was thought by the friendly editor of the popular publication where they were serialized a main part of such inspiration as they might be conjectured to have, and was, as seldom happens with editor and author, cordially agreed upon before they were begun.

The name says, indeed, so exactly and so fully what they are that little remains for their bibliographer to add beyond the meagre historical detail here given. Their short and simple annals could be eked out by confidences which would not appreciably enrich the materials of the literary history of their time, and it seems better to leave them to the imagination of such posterity as they may reach. They are rather helplessly frank, but not, I hope, with all their rather helpless frankness, offensively frank. They are at least not part of the polemic which their author sustained in the essays following them in this volume, and which might have been called, in conformity with 'My Literary Passions', by the title of 'My Literary Opinions' better than by the vague name which they actually wear.

They deal, to be sure, with the office of Criticism and the art of Fiction, and so far their present name is not a misnomer. It follows them from an earlier date and could not easily be changed, and it may serve to recall to an elder generation than this the time when their author was breaking so many lances in the great, forgotten war between Realism and Romanticism that the floor of the "Editor's Study" in Harper's Magazine was strewn with the embattled splinters. The "Editor's Study" is now quite another place, but he who originally imagined it in 1886, and abode in it until 1892, made it at once the scene of such constant offence that he had no time, if he had the temper, for defence. The great Zola, or call him the immense Zola, was the prime mover in the attack upon the masters of the Romanticistic school; but he lived to own that he had fought a losing fight, and there are some proofs that he was right. The Realists, who were undoubtedly the masters of fiction in their passing generation, and who prevailed not only in France, but in Russia, in Scandinavia, in Spain, in Portugal, were overborne in all Anglo-Saxon countries by the innumerable hosts of Romanticism, who to this day possess the land; though still, whenever a young novelist does work instantly recognizable for its truth and beauty among us, he is seen and felt to have wrought in the spirit of Realism....