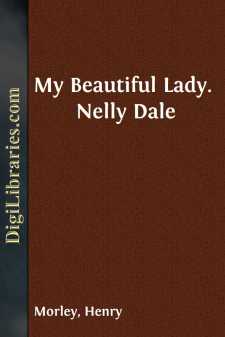 “A ray has pierced me from the highest heaven—I have believed in worth; and do believe.”

So runs Mr. Woolner’s song, as it proceeds to show the issue of a noble earthly love, one with the heavenly.  Its issue is the life of high endeavour, wherein

“They who would be something moreThan they who feast, and laugh and die, will hearThe voice of Duty, as the note of war,Nerving their spirits to great enterprise,And knitting every sinew for the charge.”

This Library is based on a belief in worth, and on a knowledge of the wide desire among men now to read books that are books, which “do,” as Milton says, “contain a potency of life in them to be as active as that soul whose progeny they are; nay, they do preserve as in a vial the purest efficacy and extraction of that living intellect that bred them.”  When, therefore, as now happens for the second time, a man of genius who has written with a hope to lift the hearts and minds of men by adding one more true book to the treasures of the land, honours us by such recognition of our aim, and fellow-feeling with it, that he gives up a part of his exclusive right to his own work, and offers to make it freely current with the other volumes of our series,—we take the gift, if we may dare to say so, in the spirit of the giver, and are the happier for such evidence that we are not working in vain.

Such evidence comes in other forms: as in letters from remote readers in lonely settlements, from the far West, from sheep-farms in Australia, from farthest India, from places to which these little volumes make their way as pioneers; being almost the first real books that have there been seen.  To send a true voice over, for delight and support of earnest workers who open their hearts wide to a good book in a way that we can hardly understand,—we who live wastefully in the midst of plenty, and are apt sometimes to leave to feed on the fair mountain and batten on the moor,—is worth the while of any man of genius who puts his soul into his work, as Mr. Woolner does.

Books in the “National Library” that come like those of Mr. Patmore and Mr. Woolner are here as friends and companions.  If they were not esteemed highly they would not be here.  Beyond that implied opinion there is nothing to be said.  He would be an ill-bred host who criticised his guest, or spoke loud praise of him before his face.  Nor does a well-known man of our own day need personal introduction.  It is only said, in consideration that this book will be read by many who cannot know what is known to those who have access to the works of artists, that Mr. Thomas Woolner is a Royal Academician, and one of the foremost sculptors of our day.  For a couple of years, from 1877 to 1879, he was Professor of Sculpture at the Royal Academy.  A colossal statue by him in bronze of Captain Cook was designed for a site overlooking Sydney Harbour.  A poet’s mind has given life to his work on the marble, and when he was an associate with Mr. Millais, Mr. Holman Hunt, and others, who, in 1850, were endeavouring to bring truth and beauty of expression into art, by the bold reaction against tame and insincere conventions for which Mr. Ruskin pleaded and which the time required, Mr. Woolner joined in the production by them of a magazine called “The Germ,” to which some of the verses in this volume were contributed.

There is no more to say; but through another page let Wordsworth speak the praise of Books:

Yet is it justThat here, in memory of all books which layTheir sure foundations in the heart of man,Whether by native prose, or numerous verse....