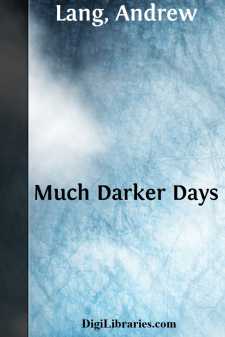 WHEN this story of my life, or of such parts of it as are not deemed wholly unfit for publication, is read (and, no doubt, a public which devoured 'Scrawled Black' will stand almost anything), it will be found that I have sometimes acted without prim cautiousness—that I have, in fact, wallowed in crime. Stillicide and Mayhem I (rare old crimes!) are child's play to me, who have been an 'accessory after the fact!' In excuse, I can but plead two things-the excellence of the opportunity to do so, and the weakness of the resistance which my victim offered.

If you cannot allow for these, throw the book out of the railway-carriage window! You have paid your money, and to the verdict of your pale morality or absurd sense of art in fiction I am therefore absolutely indifferent. You are too angelic for me; I am too fiendish for you. Let us agree to differ. I say nothing about my boyhood. Twenty-five years ago a poor boy-but no matter. I was that boy! I hurry on to the soaring period of manhood, 'when the strength, the nerve, the intellect is or should be at its height,' or are or should be at their height, if you must have grammar in a Christmas Annual. My nerve was at its height: I was thirty.

Yet, what was I then? A miserable moonstruck mortal, duly entitled to write M.D. (of Tarrytown College, Alaska) after my name—for the title of Doctor is useful in the profession—but with no other source of enjoyment or emotional recreation in a cold, casual world. Often and often have I written M.D. after my name, till the glowing pleasure palled, and I have sunk back asking, 'Has life, then, no more than this to offer?'

Bear with me if I write like this for ever so many pages; bear with me, it is such easy writing, and only thus can I hope to make you understand my subsequent and slightly peculiar conduct.

How rare was hers, the loveliness of the woman I lost—of her whose loss brought me down to the condition I attempt to depict!

How strange was her rich beauty! She was at once dark and fair—la blonde et la brune! How different from the Spotted Girls and Two-headed Nightingales whom I have often seen exhibited, and drawing money too, as the types of physical imperfections! Warm Southern blood glowed darkly in one of Philippa's cheeks—the left; pale Teutonic grace smiled in the other—the right. Her mother was a fair blonde Englishwoman, but it was Old Calabar that gave her daughter those curls of sable wool, contrasting so exquisitely with her silken-golden tresses. Her English mother may have lent Philippa many exquisite graces, but it was from her father, a pure-blooded negro, that she inherited her classic outline of profile.

Philippa, in fact, was a natural arrangement in black and white. Viewed from one side she appeared the Venus of the Gold Coast, from the other she outshone the Hellenic Aphrodite. From any point of view she was an extraordinarily attractive addition to the Exhibition and Menagerie which at that time I was running in the Midland Counties....