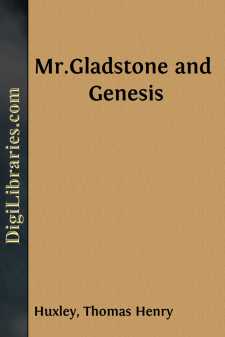 In controversy, as in courtship, the good old rule to be off with the old before one is on with the new, greatly commends itself to my sense of expediency. And, therefore, it appears to me desirable that I should preface such observations as I may have to offer upon the cloud of arguments (the relevancy of which to the issue which I had ventured to raise is not always obvious) put forth by Mr. Gladstone in the January number of this review, by an endeavour to make clear to such of our readers as have not had the advantage of a forensic education the present net result of the discussion.

I am quite aware that, in undertaking this task, I run all the risks to which the man who presumes to deal judicially with his own cause is liable. But it is exactly because I do not shun that risk, but, rather, earnestly desire to be judged by him who cometh after me, provided that he has the knowledge and impartiality appropriate to a judge, that I adopt my present course.

In the article on "The Dawn of Creation and Worship," it will be remembered that Mr. Gladstone unreservedly commits himself to three propositions. The first is that, according to the writer of the Pentateuch, the "water-population," the "air-population," and the "land-population" of the globe were created successively, in the order named. In the second place, Mr. Gladstone authoritatively asserts that this (as part of his "fourfold order") has been "so affirmed in our time by natural science, that it may be taken as a demonstrated conclusion and established fact." In the third place, Mr. Gladstone argues that the fact of this coincidence of the pentateuchal story with the results of modern investigation makes it "impossible to avoid the conclusion, first, that either this writer was gifted with faculties passing all human experience, or else his knowledge was divine." And having settled to his own satisfaction that the first "branch of the alternative is truly nominal and unreal," Mr. Gladstone continues, "So stands the plea for a revelation of truth from God, a plea only to be met by questioning its possibility" (p. 697).

I am a simple-minded person, wholly devoid of subtlety of intellect, so that I willingly admit that there may be depths of alternative meaning in these propositions out of all soundings attainable by my poor plummet. Still there are a good many people who suffer under a like intellectual limitation; and, for once in my life, I feel that I have the chance of attaining that position of a representative of average opinion which appears to be the modern ideal of a leader of men, when I make free confession that, after turning the matter over in my mind, with all the aid derived from a careful consideration of Mr. Gladstone's reply, I cannot get away from my original conviction that, if Mr. Gladstone's second proposition can be shown to be not merely inaccurate, but directly contradictory of facts known to every one who is acquainted with the elements of natural science, the third proposition collapses of itself.

And it was this conviction which led me to enter upon the present discussion. I fancied that if my respected clients, the people of average opinion and capacity, could once be got distinctly to conceive that Mr. Gladstone's views as to the proper method of dealing with grave and difficult scientific and religious problems had permitted him to base a solemn "plea for a revelation of truth from God" upon an error as to a matter of fact, from which the intelligent perusal of a manual of palaeontology would have saved him, I need not trouble myself to occupy their time and attention with further comments upon his contribution to apologetic literature....