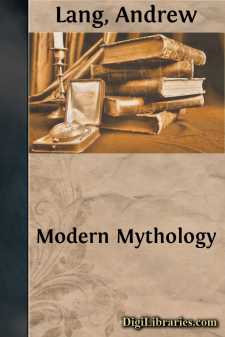 It may well be doubted whether works of controversy serve any useful purpose.  ‘On an opponent,’ as Mr. Matthew Arnold said, ‘one never does make any impression,’ though one may hope that controversy sometimes illuminates a topic in the eyes of impartial readers.  The pages which follow cannot but seem wandering and desultory, for they are a reply to a book, Mr. Max Müller’s Contributions to the Science of Mythology, in which the attack is of a skirmishing character.  Throughout more than eight hundred pages the learned author keeps up an irregular fire at the ideas and methods of the anthropological school of mythologists.  The reply must follow the lines of attack.

Criticism cannot dictate to an author how he shall write his own book.  Yet anthropologists and folk-lorists, ‘agriologists’ and ‘Hottentotic’ students, must regret that Mr. Max Müller did not state their general theory, as he understands it, fully and once for all.  Adversaries rarely succeed in quite understanding each other; but had Mr. Max Müller made such a statement, we could have cleared up anything in our position which might seem to him obscure.

Our system is but one aspect of the theory of evolution, or is but the application of that theory to the topic of mythology.  The archæologist studies human life in its material remains; he tracks progress (and occasional degeneration) from the rudely chipped flints in the ancient gravel beds, to the polished stone weapon, and thence to the ages of bronze and iron.  He is guided by material ‘survivals’—ancient arms, implements, and ornaments.  The student of Institutions has a similar method.  He finds his relics of the uncivilised past in agricultural usages, in archaic methods of allotment of land, in odd marriage customs, things rudimentary—fossil relics, as it were, of an early social and political condition.  The archæologist and the student of Institutions compare these relics, material or customary, with the weapons, pottery, implements, or again with the habitual law and usage of existing savage or barbaric races, and demonstrate that our weapons and tools, and our laws and manners, have been slowly evolved out of lower conditions, even out of savage conditions.

The anthropological method in mythology is the same.  In civilised religion and myth we find rudimentary survivals, fossils of rite and creed, ideas absolutely incongruous with the environing morality, philosophy, and science of Greece and India.  Parallels to these things, so out of keeping with civilisation, we recognise in the creeds and rites of the lower races, even of cannibals; but there the creeds and rites are not incongruous with their environment of knowledge and culture.  There they are as natural and inevitable as the flint-headed spear or marriage by capture.  We argue, therefore, that religions and mythical faiths and rituals which, among Greeks and Indians, are inexplicably incongruous have lived on from an age in which they were natural and inevitable, an age of savagery....