by Fannie A. Beers 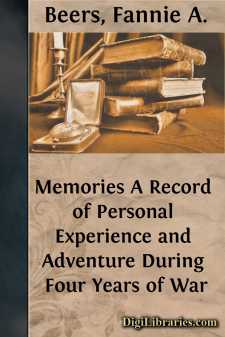 Who that witnessed and shared the wild excitement which, upon the days immediately following the victory at Manassas, throbbed and pulsated throughout the crowded capital of the Southern Confederacy can ever forget?

Men were beside themselves with joy and pride,—drunk with glory.

By night the city blazed with illuminations, even the most humble home setting up its beacon-light,—a sure guide to where loyal, devoted hearts were throbbing with patriotism.

In the general rejoicing the heavy price of victory was for a time unheeded. But Richmond had sent forth to battle her best beloved, and, alas! many were the "unreturning braves."

The dazzling light fell upon many dwellings only to reveal the utter darkness that reigned without and within. No need to ask why. All knew that in each darkened home stricken hearts filled with an agony of desolation struggled in vain to remember that they were mothers and wives of heroes, but could not yet lift their eyes from the ghastly wounds—the bloody graves of their dead.

Ah! the lovely, joyous, hopeful, patriotic days of that summer of 1861. The Confederate gray was then a thing of beauty,—the outer garb of true and loyal souls. Every man who wore it became ennobled in the eyes of every woman. These boys in gray were strangers to none. Their uniform was a passport to every heart and every home. Broad Street was thronged with them all day long.

Officers of all grades rode hither and thither, or congregated on the steps of the hotels. Squads of soldiers promenaded, gayly chatting with acquaintances whom they chanced to meet. Occasionally the sound of drum and fife or the fuller music of a brass band would herald the appearance of a company or regiment, perhaps just arrived from some distant State, eager to reach the front. On more retired streets, at their homes, humble or luxurious, sweet young girls welcomed with kindly words and sunny smiles officers and private soldiers, extending equal courtesy to both. The elegant mansions on Clay Street and elsewhere were never without soldier guests. Impromptu meals were served whenever needed. In elegant dining-rooms stately servants supplied the wants of soldiers. No one asked who they were, whence they came. They were Confederate soldiers—that was quite enough.

In the cool drawing-rooms pleasant chat beguiled the summer hours, sweet songs floated out upon the air, or the more stirring notes of "Dixie" or "The Bonnie Blue Flag," played with a spirit and vim which electrified every listener.

If these warriors who lingered here could have chosen for themselves, they would never have thus quietly rested upon the laurels won at Manassas. Contrary to their wishes, they had been recalled from the pursuit of the flying foe and consigned to temporary inactivity.

As the new companies or regiments came in they were marched into camp in the suburds or temporarily provided for in the immense tobacco warehouses which were numerous all over the city....