Memoirs of the Life of the Rt. Hon. Richard Brinsley Sheridan - Volume 01 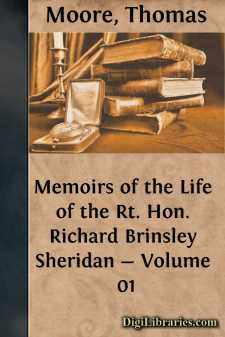 CHAPTER I. BIRTH AND EDUCATION OF MR. SHERIDAN.—HIS FIRST ATTEMPTS IN LITERATURE.

Richard Brinsley [Footnote: He was christened also by the name of Butler, after the Earl of Lanesborough.] Sheridan was born in the month of September, 1751, at No. 12, Dorset Street, Dublin, and baptized in St. Mary's Church, as appears by the register of the parish, on the fourth of the following month. His grandfather, Dr. Sheridan, and his father, Mr. Thomas Sheridan, have attained a celebrity, independent of that which he has conferred on them, by the friendship and correspondence with which the former was honored by Swift, and the competition and even rivalry which the latter so long maintained with Garrick. His mother, too, was a woman of considerable talents, and affords one of the few instances that have occurred, of a female indebted for a husband to her literature; as it was a pamphlet she wrote concerning the Dublin theatre that first attracted to her the notice of Mr. Thomas Sheridan. Her affecting novel, Sidney Biddulph, could boast among its warm panegyrists Mr. Fox and Lord North; and in the Tale of Nourjahad she has employed the graces of Eastern fiction to inculcate a grave and important moral,—putting on a fairy disguise, like her own Mandane, to deceive her readers into a taste for happiness and virtue. Besides her two plays, The Discovery and The Dupe,—the former of which Garrick pronounced to be "one of the best comedies he ever read,"—she wrote a comedy also, called The Trip to Bath, which was never either acted or published, but which has been supposed by some of those sagacious persons, who love to look for flaws in the titles of fame, to have passed, with her other papers, into the possession of her son, and, after a transforming sleep, like that of the chrysalis, in his hands, to have taken wing at length in the brilliant form of The Rivals. The literary labors of her husband were less fanciful, but not, perhaps, less useful, and are chiefly upon subjects connected with education, to the study and profession of which he devoted the latter part of his life. Such dignity, indeed, did his favorite pursuit assume in his own eyes, that he is represented (on the authority, however, of one who was himself a schoolmaster) to have declared, that "he would rather see his two sons at the head of respectable academies, than one of them prime minister of England, and the other at the head of affairs in Ireland."

At the age of seven years, Richard Brinsley Sheridan was, with his elder brother, Charles Francis, placed under the tuition of Mr. Samuel Whyte, of Grafton Street, Dublin,—an amiable and respectable man, who, for near fifty years after, continued at the head of his profession in that metropolis. To remember our school-days with gratitude and pleasure, is a tribute at once to the zeal and gentleness of our master, which none ever deserved more truly from his pupils than Mr. Whyte, and which the writer of these pages, who owes to that excellent person all the instructions in English literature he has ever received, is happy to take this opportunity of paying....