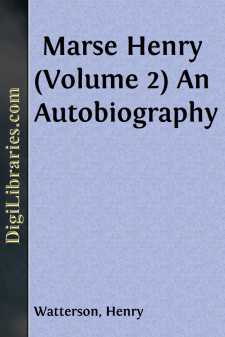 Swift's definition of "conversation" did not preside over or direct the daily intercourse between Charles Sumner, Charles Eames and Robert J. Walker in the old days in the National Capital. They did not converse. They discoursed. They talked sententiously in portentous essays and learned dissertations. I used to think it great, though I nursed no little dislike of Sumner.

Charles Eames was at the outset of his career a ne'er-do-well New Englander—a Yankee Jack-of-all-trades—kept at the front by an exceedingly clever wife. Through the favor she enjoyed at court he received from Pierce and Buchanan unimportant diplomatic appointments. During their sojourns in Washington their home was a kind of political and literary headquarters. Mrs. Eames had established a salon—the first attempt of the kind made there; and it was altogether a success. Her Sundays evenings were notable, indeed. Whoever was worth seeing, if in town, might usually be found there. Charles Sumner led the procession. He was a most imposing person. Both handsome and distinguished in appearance, he possessed in an eminent degree the Harvard pragmatism—or, shall I say, affectation?—and seemed never happy except on exhibition. He had made a profitable political and personal issue of the Preston Brooks attack. Brooks was an exceeding light weight, but he did for Sumner more than Sumner could ever have done for himself.

In the Charles Eames days Sumner was exceedingly disagreeable to me. Many people, indeed, thought him so. Many years later, in the Greeley campaign of 1872, Schurz brought us together—they had become as very brothers in the Senate—and I found him the reverse of my boyish ill conceptions.

He was a great old man. He was a delightful old man, every inch a statesman, much of a scholar, and something of a hero. I grew in time to be actually fond of him, passed with him entire afternoons and evenings in his library, mourned sincerely when he died, and went with Schurz to Boston, on the occasion when that great German-American delivered the memorial address in honor of the dead Abolitionist.

Of all the public men of that period Carl Schurz most captivated me. When we first came into personal relations, at the Liberal Convention, which assembled at Cincinnati and nominated Greeley and Brown as a presidential ticket, he was just turned forty-three; I, two and thirty. The closest intimacy followed. Our tastes were much alike. Both of us had been educated in music. He played the piano with intelligence and feeling—especially Schumann, Brahms and Mendelssohn, neither of us ever having quite reached the "high jinks" of Wagner.

To me his oratory was wonderful. He spoke to an audience of five or ten thousand as he would have talked to a party of three or six. His style was simple, natural, unstrained; the lucid statement and cogent argument now and again irradiated by a salient passage of satire or a burst of not too eloquent rhetoric....