Marietta A Maid of Venice 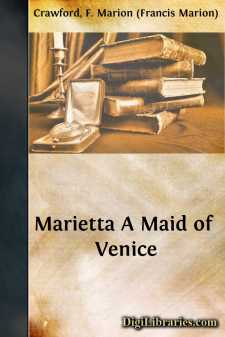 Very little was known about George, the Dalmatian, and the servants in the house of Angelo Beroviero, as well as the workmen of the latter's glass furnace, called him Zorzi, distrusted him, suggested that he was probably a heretic, and did not hide their suspicion that he was in love with the master's only daughter, Marietta. All these matters were against him, and people wondered why old Angelo kept the waif in his service, since he would have engaged any one out of a hundred young fellows of Murano, all belonging to the almost noble caste of the glass-workers, all good Christians, all trustworthy, and all ready to promise that the lovely Marietta should never make the slightest impression upon their respectfully petrified hearts. But Angelo had not been accustomed to consider what his neighbours might think of him or his doings, and most of his neighbours and friends abstained with singular unanimity from thrusting their opinions upon him. For this, there were three reasons: he was very rich, he was the greatest living artist in working glass, and he was of a choleric temper. He confessed the latter fault with great humility to the curate of San Piero each year in Lent, but he would never admit it to any one else. Indeed, if any of his family ever suggested that he was somewhat hasty, he flew into such an ungovernable rage in proving the contrary that it was scarcely wise to stay in the house while the fit lasted. Marietta alone was safe. As for her brothers, though the elder was nearly forty years old, it was not long since his father had given him a box on the ears which made him see simultaneously all the colours of all the glasses ever made in Murano before or since. It is true that Giovanni had timidly asked to be told one of the secrets for making fine red glass which old Angelo had learned long ago from old Paolo Godi of Pergola, the famous chemist; and these secrets were all carefully written out in the elaborate character of the late fifteenth century, and Angelo kept the manuscript in an iron box, under his own bed, and wore the key on a small silver chain at his neck.

He was a big old man, with fiery brown eyes, large features, and a very pale skin. His thick hair and short beard had once been red, and streaks of the strong colour still ran through the faded locks. His hands were large, but very skilful, and the long straight fingers were discoloured by contact with the substances he used in his experiments.

He was jealous by nature, rather than suspicious. He had been jealous of his wife while she had lived, though a more devoted woman never fell to the lot of a lucky husband. Often, for weeks together, he had locked the door upon her and taken the key with him every morning when he left the house, though his furnaces were almost exactly opposite, on the other side of the narrow canal, so that by coming to the door he could have spoken with her at her window. But instead of doing this he used to look through a little grated opening which he had caused to be made in the wall of the glass-house; and when his wife was seated at her window, at her embroidery, he could watch her unseen, for she was beautiful and he loved her. One day he saw a stranger standing by the water's edge, gazing at her, and he went out and threw the man into the canal. When she died, he said little, but he would not allow his own children to speak of her before him. After that, he became almost as jealous of his daughter, and though he did not lock her up like her mother, he used to take her with him to the glass-house when the weather was not too hot, so that she should not be out of his sight all day.

Moreover, because he needed a man to help him, and because he was afraid lest one of his own caste should fall in love with Marietta, he took Zorzi, the Dalmatian waif, into his service; and the three were often together all day in the room where Angelo had set up a little furnace for making experiments. In the year 1470 it was not lawful in Murano to teach any foreign person the art of glass-making; for the glass-blowers were a sort of nobility, and nearly a hundred years had passed since the Council had declared that patricians of Venice might marry the daughters of glass-workers without affecting their own rank or that of their children. But old Beroviero declared that he was not teaching Zorzi anything, that the young fellow was his servant and not his apprentice, and did nothing but keep up the fire in the furnace, and fetch and carry, grind materials, and sweep the floor. It was quite true that Zorzi did all these things, and he did them with a silent regularity that made him indispensable to his master, who scarcely noticed the growing skill with which the young man helped him at every turn, till he could be entrusted to perform the most delicate operations in glass-working without any especial instructions. Intent upon artistic matters, the old man was hardly aware, either, that Marietta had learned much of his art; or if he realised the fact he felt a sort of jealous satisfaction in the thought that she liked to be shut up with him for hours at a time, quite out of sight of the world and altogether out of harm's way....