Margarita's Soul The Romantic Recollections of a Man of Fifty 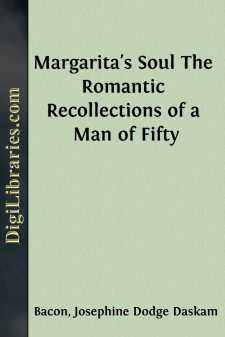 Sir Hugh and the Mermaiden.

Roger Bradley was walking up Broadway. This fact calls sharply for comment, for he had not done it in years; the thoroughfare was intolerable to him. But one of its impingements upon a less blatant avenue had caught him napping and he found himself entangled in a mesh of theatre dribblings, pool-room loungers, wine-touts and homeward bent women of the middle, shopping class. Being there, he scorned to avail himself of the regularly recurring cross streets, but strode along, his straight, trim bulk, his keen, judicial profile—a profile that spoke strong of the best traditions of American blood—marking him for what he was among a crowd not to be matched, in its way, upon the Western Continent.

At the second slanting of the great, tawdry lane he bent with it and encountered suddenly a little knot of flustered women just descended from the elevated way that doubled the din and blare of the shrieking city. They were bundle-filled, voluble, dressed by any standards save those of their native city, far beyond their probable means and undoubted station. As they stopped unexpectedly and hesitated, damming the flood of hurrying citizens, Roger halted of necessity and stepped backward, but in avoiding them he bumped heavily against the person behind him. A startled gasp, something soft against his shoulder, the sharp edge of a projecting hat, told him that this person was a woman, and stepping sidewise into the shelter of a neighbouring news-stall, he raised his hat with a courtesy alien to the place and hour.

"No," said the woman, who wore a heavy grey veil, and as that is literally all she said and as her method of saying it was as convincing as it was simple, one would suppose the incident closed and look to see Roger complete his journey to his club without further adventure.

Do I wish he had? God knows. It was undoubtedly the turning-point in his life and he was forty. Had he gone on to the club where I was waiting for him; had we dined, played out our rubber, dropped in at the occasional chamber concert that was our usual and almost our only dissipation in those days, I should not now be ransacking old letters and diaries from which to make this book, nor would Margarita's picture—her loveliest, as Juliet—lean toward me from the wall. She is smiling; not as one smiles in photographs, but as a flesh-and-blood woman droops over the man she loves and smiles her heart into his lips, reaching over his shoulder. Everything slips behind but you two, herself and you, when you look at it. Sarony, who took it, told me he had never posed such a subject, and I believe him.

Well, well, it's done now. It was twenty years ago that Roger bumped into his fate in that eddy of Broadway and I was as powerless as you are now to disentangle him and keep him for myself, which, selfishly enough, of course, I wanted terribly to do. You see, he was all I had, Roger, and I was hoping we would play the game out together....