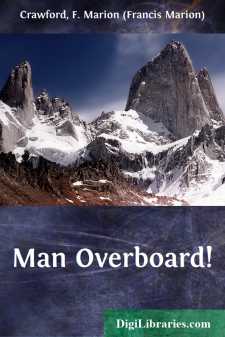 Yes—I have heard "Man overboard!" a good many times since I was a boy, and once or twice I have seen the man go. There are more men lost in that way than passengers on ocean steamers ever learn of. I have stood looking over the rail on a dark night, when there was a step beside me, and something flew past my head like a big black bat—and then there was a splash! Stokers often go like that. They go mad with the heat, and they slip up on deck and are gone before anybody can stop them, often without being seen or heard. Now and then a passenger will do it, but he generally has what he thinks a pretty good reason. I have seen a man empty his revolver into a crowd of emigrants forward, and then go over like a rocket. Of course, any officer who respects himself will do what he can to pick a man up, if the weather is not so heavy that he would have to risk his ship; but I don't think I remember seeing a man come back when he was once fairly gone more than two or three times in all my life, though we have often picked up the life-buoy, and sometimes the fellow's cap. Stokers and passengers jump over; I never knew a sailor to do that, drunk or sober. Yes, they say it has happened on hard ships, but I never knew a case myself. Once in a long time a man is fished out when it is just too late, and dies in the boat before you can get him aboard, and—well, I don't know that I ever told that story since it happened—I knew a fellow who went over, and came back dead. I didn't see him after he came back; only one of us did, but we all knew he was there.

No, I am not giving you "sharks." There isn't a shark in this story, and I don't know that I would tell it at all if we weren't alone, just you and I. But you and I have seen things in various parts, and maybe you will understand. Anyhow, you know that I am telling what I know about, and nothing else; and it has been on my mind to tell you ever since it happened, only there hasn't been a chance.

It's a long story, and it took some time to happen; and it began a good many years ago, in October, as well as I can remember. I was mate then; I passed the local Marine Board for master about three years later. She was the Helen B. Jackson, of New York, with lumber for the West Indies, four-masted schooner, Captain Hackstaff. She was an old-fashioned one, even then—no steam donkey, and all to do by hand. There were still sailors in the coasting trade in those days, you remember. She wasn't a hard ship, for the old man was better than most of them, though he kept to himself and had a face like a monkey-wrench. We were thirteen, all told, in the ship's company; and some of them afterwards thought that might have had something to do with it, but I had all that nonsense knocked out of me when I was a boy. I don't mean to say that I like to go to sea on a Friday, but I have gone to sea on a Friday, and nothing has happened; and twice before that we have been thirteen, because one of the hands didn't turn up at the last minute, and nothing ever happened either—nothing worse than the loss of a light spar or two, or a little canvas. Whenever I have been wrecked, we had sailed as cheerily as you please—no thirteens, no Fridays, no dead men in the hold. I believe it generally happens that way.

I dare say you remember those two Benton boys that were so much alike? It is no wonder, for they were twin brothers. They shipped with us as boys on the old Boston Belle, when you were mate and I was before the mast. I never was quite sure which was which of those two, even then; and when they both had beards it was harder than ever to tell them apart....